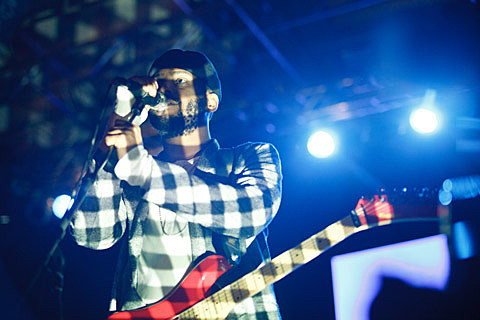 Groovy electronic crooner Twin Shadow recently postponed most dates of his Eclipse tour (including his 10/28 stop at Terminal 5), stating that he needed to re-evaluate where the project was headed. It seems that things have settled down, as the artist announced that he's left his former home 4AD for Warner Bros where he'll be labelmates with Bette Middler. George Lewis Jr. explains:

Towards the end of recording this third Twin Shadow album, I came into a strong feeling--a place of creative change. I wanted to give you an uncompromising experience at every turn. To do this, I had to put the brakes on the tour, the planned album release, and reconsider where Twin Shadow was headed. With even more perspective, I realized that I was going to need help to pull off the vision for this album

I'm excited to announce that I've found a group of like-minded people at Warner Bros. Records to help me accomplish this goal. In the interest of progress and adventure, I look forward to the new relationship (and hopefully a coffee with Prince).

Maybe a starfish to go with that coffee too, George. In addition to the new album, Twin Shadow has announced rescheduled tour dates, including SXSW and a new NYC date that's happening at Music Hall of Williamsburg on April 1. Tickets for that show go on sale Friday (11/7) at noon with an artist presale beginning Wednesday (11/5) at 10 AM and an AmEx presale beginning Wednesday at noon. Tickets from the T5 date will be still be honored.

Check out the updated dates listed, along with a video of Twin Shadow covering 112's "Cupid," below...