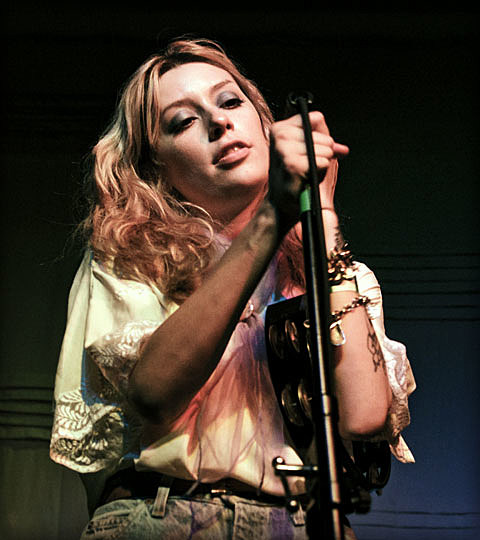 Twin Sister will release a limited edition 12" remix album of material off of their debut LP In Heaven on January 30. You've already heard Balam Acab's remix of "Kimmi in a Rice Field". It will be backed by a Lindstrom & Prins Thomas remix of "Bad Street," which you can stream below. The 12" is available for pre-order at the Domino webstore.

Twin Sister will have the 12" available on their 2012 tour with Ava Luna, which doesn't come to NYC, but both of those bands play the BV Holiday Party at Bowery Ballroom (12/17) with Widowspeak. Tickets for that show are still on sale and only $8.

Speaking of the 12/17 Bowery show, we're happy to announce some DJ additions to the bill. As soon as doors open and until Ava Luna go on, music will be provided by a mysterious team known as Invisible Glowstix. After that, between bands and until the last person leaves the club, the tunes will be coming courtesy of the slightly more well known Dale Earnhardt Jr. Jr. who will put down their guitars and mics for the night in favor of laptops and turntables. The Detroit band are also playing (live) shows in Philly and Boston while they're in the area.

Speaking of Balam Acab remixes, he recently remixed Charli XCX's single "Nuclear Seasons," which came out in November. You can stream his remix and watch the video for the original below. The original is available for free download in exchange for your email address at Charli XCX's website and you can download the Balam Acab remix by liking her facebook page.

--
Twin Sister - The Alternate Side Session

Yourstru.ly Presents: Twin Sister "Stop" from Yours Truly on Vimeo.