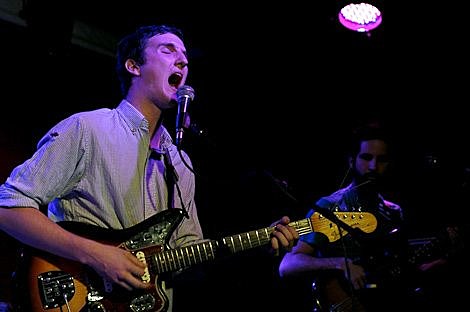 Holiday Shores' echoey Floridian beach pop will pair with Brooklyn's own Twin Sister for a post-SXSW tour this March. It wraps up with an April 1st show at the Cameo where Twin Sister also play tonight (2/25).

Speaking of which, both will be at the Austin fest (and Twin Sister is at MtyMx too). One of Holiday Shores' shows will be a day showcase for its label, Two Syllable Records, on Friday,s March 19th at The Tiniest Bar In Texas. Joining them will be Small Black and Washed Out (on tour together), Fergus & Geronimo, That Ghost, Inlets (who have an album and shows coming up), Candy Claws, Active Child and Young Buffalo. A flyer is below.

One of Twin Sister's Austin shows will be the BrooklynVegan day party happening on two stages at Club DeVille on Friday, March 19th from noon-6pm. Full lineup still TBA, but this is the free show Lucero and The Antlers are playing.

Twin Sister has plenty of other NYC dates before and after that. They play at (as mentioned) Cameo tonight (2/25) with Toro y Moi and Grandchildren, at Matchless on Friday (2/26) with Lost Boy and Post Magic, and more. They're also at Bowery Ballroom on April 9th for the NYC stop on the Xiu Xiu/Tune Yards tour (Zola Jesus is on that awesome four-band bill too).

All tour dates and a flyer are below...