Twisted Sister at the Nokia Theater, 2008 (more by Tim Griffin) 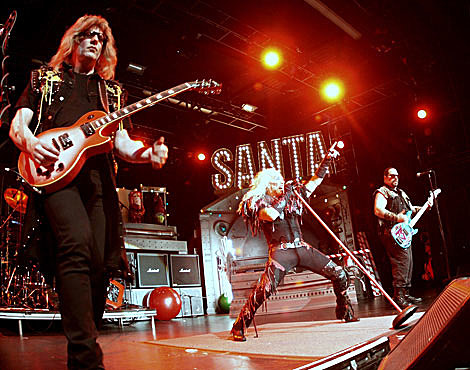 What do you want to do with your life? Well, retire comfortably and die in my sleep.

Okay, so the answer may be a bit different now than it once was, but for one night you can change it back to "rock." The enduring Twisted Sister is coming to the Best Buy Theater on September 5 with Adrenaline Mob (featuring Symphony X singer Russell Allen and A. J. Pero of Twisted Sister on drums) and comedian Don Jamieson (of That Metal Show) in support. Tickets go on sale Friday (6/27) at noon. Sure, raise a brow if you wish, but the Kirk Windstein of heavy heavies Crowbar vouched for Dee Snider and company on Invisible Oranges on East Village Radio, calling them one of the best live acts he's seen. Hey, maybe he was even talking about the 2008 Christmas show.

Of course, Twisted Sister aren't the only hair band still making the rounds in 2014. Quiet Riot will release 10 tomorrow (6/27) through iTunes and Amazon. It's their first studio album since singer Kevin Debrow passed away in 2007. The name of the new vocalist behind the mic? Jizzy Pearl. No, really. The band non-ironically begins a 'Bang Your Head' US tour on July 10 with the likes of Faster Pussycat, Bullet Boys, and Gilby Clarke of Guns n' Roses. It hits The Paramount in Long Island on 7/23. All dates and a promo video for 10 appear below.

Mr. Big are also putting out a new record. The winners of the hearts of Japan and guitar teachers voting on Guitar Magazine polls will drop ...The Stories We Could Tell on Frontiers Records in September. Maybe one of those stories will finally bring closure to "To Be With You." (Were you next? WERE YOU?) Check out the utterly competent, two million views and counting, "Undertow" from the new album below.

Finally, speaking of bands that never knew a song they couldn't tack an acoustic intro on to, Tesla have released a video for "So Divine..." off of their recently released Simplicity. It features a lot of cautious stage moves. (Not shown: three hours of stretching.) Surprised to see Tesla name? So. . . (ahem) did you think that it's over? The band is also currently on tour. Find "So Divine..." and the remaining dates below.

That takes you back, right? Maybe this will spur on a hair retrospective aimed at discovering what happened to the twins in those Cinderella videos. Or not.

All of the dates along with the aforementioned videos appear below.