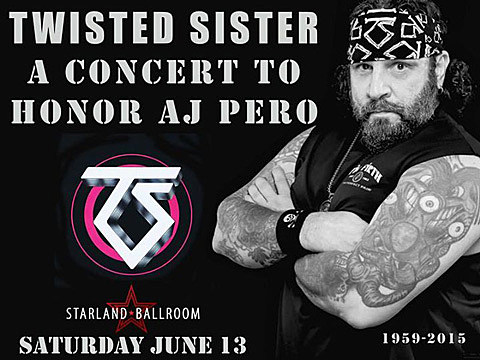 Enduring New York rock band Twisted Sister recently lost their drummer, AJ Pero, to a heart attack while on tour with Adrenaline Mob. The band has now announced a special show to honor their bandmate which will happen June 13 at Starland Ballroom in New Jersey. The full lineup of this show has not been announced yet -- they currently just list "plus special guests." Tickets for that show go on sale Wednesday (4/8) at 10 AM.

Twisted Sister's only other North American date is the "Metal Meltdown" at Las Vegas' Hard Rock Hotel on May 30 with Extreme, Skid Row and Great White.

In other news, AJ Pero's longtime girlfriend has launched a crowdfunding campaign to help their 14-year-old daughter, Brianna.