Dee Snider (second from left) and his other Celebrity Apprentice contestants 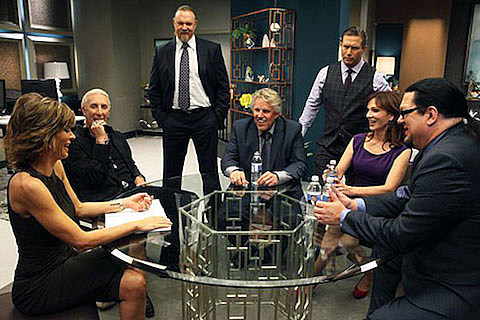 Donald Trump hasn't had much luck getting permission to use pop songs on his presidential campaign, having been denied by Neil Young, R.E.M., Steven Tyler and more. But he finally found one: Twisted Sister's "We're Not Gonna Take It." The Donald and the hair-metal vets are old pals, as singer Dee Snider was on Trump's All-Star Celebrity Apprentice back in 2013 -- he was fired. Snyder spoke to Canadian Business.com about Trump using the song:

He called and he asked, which I appreciated. I said, 'Look, we don't see eye to eye on everything--there are definitely issues that we're far apart on.' But thinking back to when I wrote the song and what the song is about, it's about rebellion, speaking your mind and fighting the system. If anybody's doing that, he sure is. Trump and Bernie Sanders are the two extremes. They're raising holy hell and shaking everything up. That's what 'We're Not Gonna Take It' is about. And we're friends. I have spent time with Donald and his family. I don't think either of us expected that we would like each other, but you know, Donald Trump is a pretty chill guy. He's a frontman. When that camera goes on, he furls his brow, he does his thing. Off-camera he's very self-deprecating. He makes jokes about being too orange and about his hair.

Dee Snider is currently celebrating the holiday season every night in Toronto with his "Dee Snider's Rock & Roll Christmas Tale." The musical, which Snider wrote and which made its debut in Chicago last year, is a Faustian tale about a past-their-prime metal band willing to sell their soul to the Devil but are thwarted by the Christmas spirit.