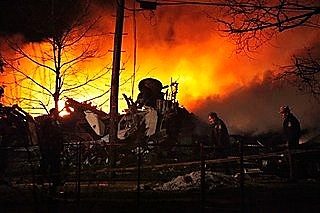 Two members of jazz musician Chuck Mangione's band were among those killed on the plane that crashed into a house near Buffalo, N.Y., a publicist said Friday.

Publicist Sanford Brokaw identified the band members as Gerry Niewood, 64, of Rochester, N.Y., and Coleman Mellett of Maryland. Niewood played saxophone and flute and Mellett was a guitarist.

In a statement Mangione said: "I'm in shock over the horrible, heartbreaking tragedy of the crash of Flight 3407, which took the lives of my dear friends and band members. I am grieving and praying with their families and friends."

Mangione and his band were scheduled to perform Friday with the Buffalo Philharmonic Orchestra at Kleinhans Music Hall. The concert has been postponed.

All 49 people on board and one person on the ground were killed in the crash of Continental Connection Flight 3407 from Newark, N.J. The cause of the disaster was under investigation. [MSNBC]

A partial list of passengers onboard also identifies Alison Des Forges, of Buffalo, considered one of the world's leading experts on the genocide in Rwanda, Beverly Eckert, of Stamford, Conn., whose husband died in the World Trade Center attacks of Sept. 11, 2001, and Carl Yarber, of Riverside, Calif., member of several Tampa Bay, Fla.-area bands over the past several decades. RIP.