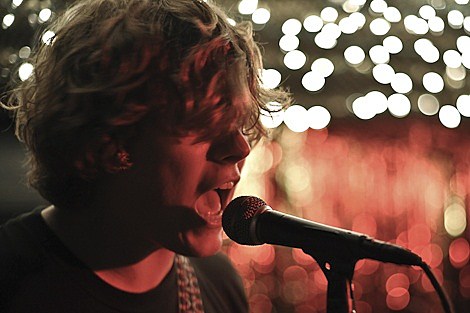 After my own greasy foray into a Popeye's a few blocks away, I was ready to see the wunderkind, who is freshly graduated from the University of San Francisco. Once upon a time, Segall was a one man band, but he's expanded his outfit to a three-piece. Clearly the night's headliner at Amnesia, he packed the joint. After sets by openers Snakeflower 2 and the Rantouls, he mostly played familiar songs from his 2008 self-titled release on CastleFace Records. However, he also delivered a few examples of his self-described "sludgier" work on the brand new Lemons (Goner Records).

Sludge or no sludge, Segall's solid work ethic is evident. He's constantly playing gigs at bars like the Knockout, the Hemlock, and the Eagle Tavern -- basically anywhere flannel is the prevailing fashion, alongside those straw fedora hats favored by the fixed-gear crowd. Despite his omnipresence on SF's dive bar scene, he's pretty modest about his dedication to his music. "There are a lot of ways that I am a slacker," he explains over the phone a month after the fateful Amnesia show as he and his band drive to New Orleans. "But if I'm not doing music, I feel like I'm wasting my time." [SF Bay Guardian]

An MP3 from Lemons is at the top of this post. Ty returns to NYC for a trio of shows on his North American tour in September. On September 18th, he'll play Death By Audio's 'The Maze' (the art installation being supported by this Saturday's 12-hour benefit at the venue).

Ty plays a Mercury Lounge show on September 20th with Golden Triangle and tourmates and fellow SF band The Mantels. Tickets for that go on sale Saturday, July 25th at noon. Ty Segall then goes to New Jersey for a September 21st show at Maxwell's. The Mantels opens that too, with Digital Leather. Tickets are on sale now.

Ty will be one of the acts at Goner Fest 6, put on by Goner Records September 24th-26th in Memphis, TN. Other acts include a reformed version of Jay Reatard's first band The Reatards, Thee Oh Sees, The Fresh & Onlys, Magic Kids (who are in NYC this weekend), Box Elders, The Intelligence, Nobunny, Cheater Slicks and just about every other vital band you could vaguely lump in with the current "garage" scene (No Sic Alps, though). Tickets for day one, two and three of the fest are on sale now (though three-day 'Golden Passes' seem to be either sold out or hard to find).

More info on that festival, with all Ty Segall dates and a couple videos, below... 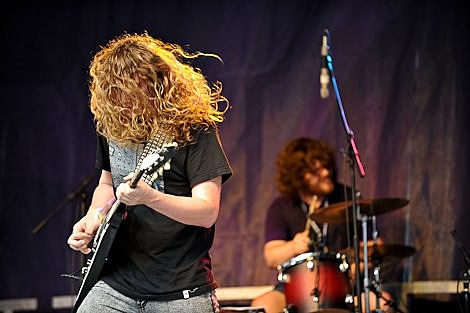 Tickets are now on sale for Goner Records' sixth annual music festival, which will take place September 24-26, 2009, in Memphis, TN. While Goner Fest 6 will open and close with shows at the Goner Records Store, the main event, four evening showcases, will be held at the Hi-Tone Café. There will also be various daytime music and art shows throughout the weekend, as well as a Saturday afternoon mini-fest at Murphy's.

Goner Fest 6 will bring together 38 bands from six countries for four days and three nights of rock and roll mayhem.
Over the last half-decade, Goner Fest has increasingly found itself on the radar of mainstream independent music. As noted in Paste Magazine, the event "tends to fill three days with so much overdriven, yelp-tastic rock 'n' roll that, for the slightest moment, the city of Memphis becomes one big parents' garage."

Attendance for Goner Fest 6 is anticipated to top 2500 people for the weekend; as many as half of whom will be traveling to Memphis for the event. Previous festivals have attracted rock and roll fans from Austria, Japan, Germany, Italy, Holland, France, UK, Australia, Croatia and Canada.

Highlights of the Goner Fest 6 roster include reformed versions of two legendary Memphis bands from the 1990s:
The Compulsive Gamblers existed both before and after the Oblivians, and were fronted by Oblivians co-founders Greg Cartwright and Jack Yarber. Mark Deming at All Music Guide gives a pretty apt description: "Folding together equal portions of greasy '50s pop, Memphis-style rhythm & blues, and a punk rocker's sense of casual experimentation and musical cross breeding, the Compulsive Gamblers were at the forefront of the Memphis roots punk scene."

Also on the bill is a reformed version of Jay Reatard's first band, The Reatards, with a line-up that dates back to 1998 when Jay was 17 and his first album, Teenage Hate, was released on Goner Records. At Goner Fest 6, Jay will be joined by original Reatards Steve Albundy (the Feelers) and Elvis Wong (Tokyo Electron). Obnoxious, snotty and frantic, the Reatards provided the blueprint for the last decade of garage punk bands.