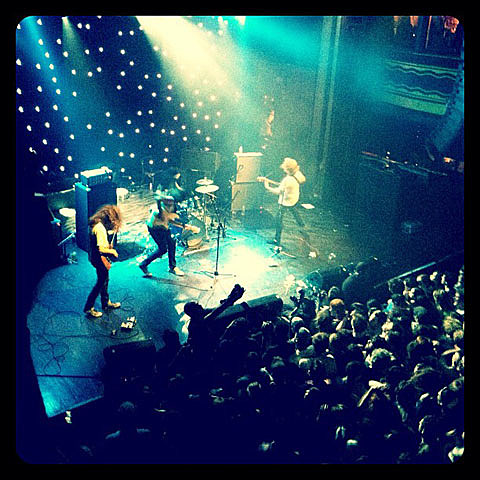 Of the handful of times I've seen Ty Segall live (admittedly only a fraction of his shows in the city), his set at Webster Hall was without a doubt the best. People often talk about performers feeding off the energy of the room--that interaction was palpable between Ty and crowd Wednesday night.

The band pieced together a front-to-back set of rockers, and the front half of the crowd went nuts: kids dancing, smashing into each other, doing back flips off the stage, passing around flask-sized bottles of Jack, screaming about being on mushrooms (that last one was just one guy, but he was loud). It was nothing you wouldn't see on a Friday night at most sweaty DIY spaces, but still pretty encouraging considering the scene: a large venue that was at or near capacity for a lineup of unpolished rock bands. Assuming no one landed on your head, it was hard not to have fun (Ty at one point politely reminded everyone to be careful and watch out for one another).

And the snotty garage rock tunes fit perfectly with the offstage madness. Ty and band seemed gamely down for the end-of-semester party they'd walked into and ripped through the material, hitting "Girlfriend" and "Finger," two Melted highlights, early with the requisite head-banging, and easing judiciously into new songs before coming back into some extended jams (Slaughterhouse, the first record with the touring band, is due June 26 on In the Red). A crushing version of "Caesar" closed the encore. Barking into his overdriven mic, Ty twice called it the best show ever.

White Fence, who played before, were also in punky, blown-speakers mode, leaving behind the druggy jangle that marks most of their recorded output and honing in on driving rhythms and lots of Tim Presley solos. The joint songs, from the White Fence/Ty Segall split Hair, were great too. The pair--aided by Ty bassist Mikal Cronin and White Fence drummer Nick Murray--sandwiched those tunes between their band's sets and traded off licks and lyrics. Hopefully they'll get together again.

On the undercard, Strange Boys growled through a set of swampy rock tunes. Jonathan Toubin, who has lots gigs scheduled now that he is back, provied the music between sets. The Men started things off, but I missed their set (how was it?).