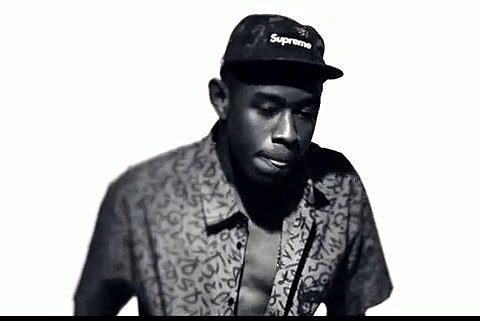 I'm not gay, I just wanna boogie to some Marvin
(What you think of Hayley Williams?) Fuck her, Wolf Haley robbin' 'em
I'll crash that fuckin' airplane that faggot nigga B.o.B is in
And stab Bruno Mars in his goddamn esophagus
And won't stop until the cops come in...

...They say success is the best revenge
So I beat DeShay up with the stack of magazines I'm in
Oh, not again, another critic writin' report
I'm stabbin' any bloggin' faggot hipster with a Pitchfork
[Tyler the Creator's "Yonkers" lyrics]

Tyler The Creator's second album GOBLIN will be released in April through XL Recordings. Two tracks, "Yonkers" and "Sandwitches" are on iTunes now. Tyler also has a new video for "Yonkers" that was directed by Wolf Haley (aka himself). You can watch it below (some of the lyrics are above - you can sing along).

Odd Future (The group Tyler is also a part of) is on tour now and plays Santos Party House tonight (2/15), and Jimmy Fallon on Wednesday (Tyler included).