My art is dedicated to those other fringe dwellers and friends of fringe dwellers, those who want something beyond reality TV, casino gambling, car payments, 401k, church on Sunday, family portraits on the mantle. We will build new kinds of families. The nuclear family is dead. Long live the dead nuclear family.

I willingly and lovingly now put my life on parade, every crack and blemish proudly metaphorically displayed. I have freed myself from the bondage of judgement of the nuclear family. And me and mine will rage like a fire through the world of bigotry, ignorance, lies, oppression, piety for the sake of piety, unholy holiness.

The first single, "He's the Candy," and its video (directed by Matthew Boyle & Damon Andrew Embry) takes the '50s Nuclear Family ideal head on with a blast of mutant punk and twisted humor that feels inspired by Lynch and Waters. You can watch the video below.

Tyson will be on tour in November and will stop in Brooklyn to play Hank's Saloon on 11/25 with The Britemores and Les Sans Culottes -- $10 at the door. All dates are listed below.

In sad, related news, Chainsaw Kittens drummer Eric Harmon died on October 4 at age 48 after a battle with cancer. (Eric had to bow out of a Chainsaw Kittens' reunion show in September due to health issues.) Rest in peace, Eric. 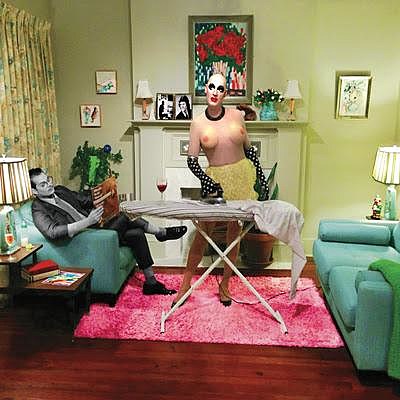