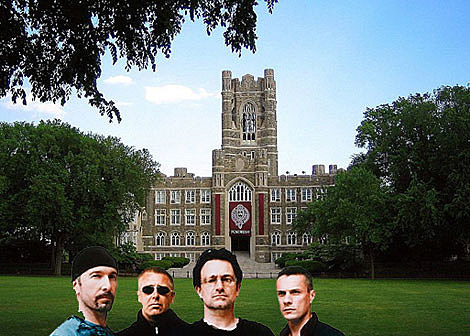 The Alternate Side reports, via Hartford Courant...

It was all very hush-hush, except that these things always leak: U2, in New York March 2-6 for a week-long stand on "The Late Show with David Letterman," caps its stint in the Big Apple with a "secret" performance Friday, March 6, at Fordham University.

Don't go canceling your Friday plans, though: a Sound Check source reports that it's a Fordham-only show, and says it'll require a university ID (a Fordham ID in your name, that is) to get anywhere near campus that day.

Professors have reportedly been told by the administration to cancel morning classes "for security reasons." The band is expected to play at Fordham after appearing on "Good Morning America."