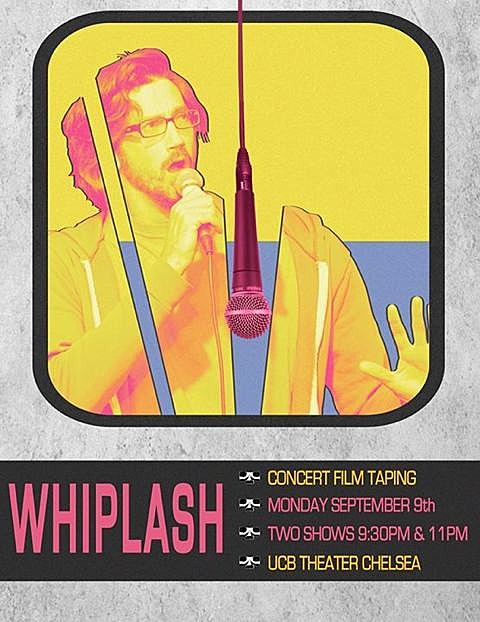 One of the greatest recurring comedy showcases in this cesspool of a city gone soft has got to be Whiplash which takes place every Monday at 11pm at the UCB Theater in Chelsea. Sadly, the late hour of the show and the day of the week it falls on makes it difficult for your man Klaus to attend in person because he, me, has a big boy job with lots of big boy responsibilities and I gotta hot the rack at a reasonable time during the week or else things could fall apart at the office and my life and livelihood could be ruined. Which is a shame. Because Whiplash, which is hosted by the great and prolific Leo Allen, doesn't just get the occasional huge mega-star guest every now and then; their weekly line-ups are chock full of them. Always. I mean, just go to the With Reservation Whiplash photo page and you'll see that people like Aziz Ansari, Jim Gaffigan, Zach Galifianakis, Louis CK, Chris Rock, Eugene Mirman, Kristen Schaal, Todd Barry and so many other big dogs have graced its stage. It's insane! And it's always free!

As per usual, you can catch Whiplash on Monday night (9/9). However, this night will be a little different, for the fine folks at Whiplash will be undertaking the production of a live Whiplash concert movie! It's being billed as a Whiplash Concert Film, but if you want to get technical I can guarantee this sucker will NOT be shot on film. In this economy? Shyuh! Right! If it is, I'll get a tattoo across my face of something terrible. Anyhow, this Monday, Whiplash will take place TWICE; there will be a 9:30pm taping and an 11:00pm taping. Get your tickets now because in about 5 minutes both shows will be solidly sold out (there will be stand-by lines for each show, though).

In other comedy news...

* Dave Hill's book is now out in paperback. Celebrate with him TONIGHT (9/6) at 7pm at Book Court in Cobble Hill. He'll be reading, rocking and giving out free drinks!

* Todd Barry is taping a podcast live in Brooklyn & touring.

* Comedy Bang Bang is touring too.