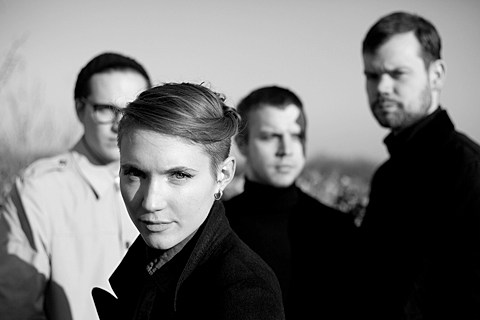 London four-piece Woman's Hour have been together since 2011, and over the course of a handful of singles have carved out an identifiable sound: chilled-out pop, heavy on synths but strictly slow-dance material. Comparisons to The xx are not entirely off-mark, but the quartet aren't quite that minimal. (Sade or Morcheeba might work too, you're definitely in the right ballpark.) After waves of UK accolades, Woman's Hour have signed with Secretly Canadian in North America and will release new single "Her Ghost" which is out now digitally in the US and will be available as a 7" in the UK on March 24. You can stream it, plus their other singles, below.

Woman's Hour will be making their first trip to the States next month for SXSW and will make time for shows on both coasts while here. NYC gets two shows: Mercury Lounge on March 19 and Glasslands on March 21. Tickets to Glasslands are on sale now and tickets for Mercury Lounge are on sale Friday (2/14) at noon. All dates are listed, along with the song streams, below...