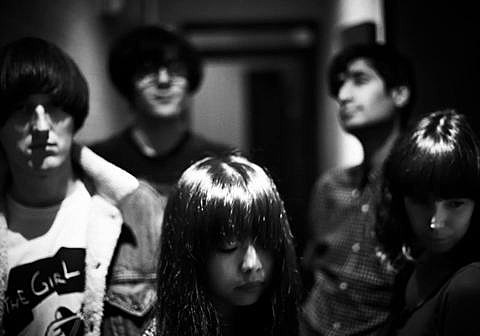 UK quintet The History of Apple Pie began two years ago or so as a home recording project for couple Stephanie Min and Jerome Watson but soon grew into a full-on band. Their MO: Mining the early '90s indie sweet spot between Pale Saints and Pavement, or maybe the point point where shoegaze met Britpop. You know, sugary harmonies and melodies are pulverized with distorted, swirling guitars, with hooks and noise finding equal sonic space. Original it is not, but they do it very well. The band released their debut album, Out of View, earlier this year and you can stream it below. The band will release a new single, "Don't You Wanna Be Mine?," on October 14 and you can stream that below too.

The band will be heading to NYC next month for CMJ. Their only confirmed show is the Flower Booking showcase at Knitting Factory on October 19 where they'll share the bill with Obits and Kid Karate. Tickets are on sale. More are sure to be announced as we get closer to the fest. Meanwhile, check out the album and single streams below.