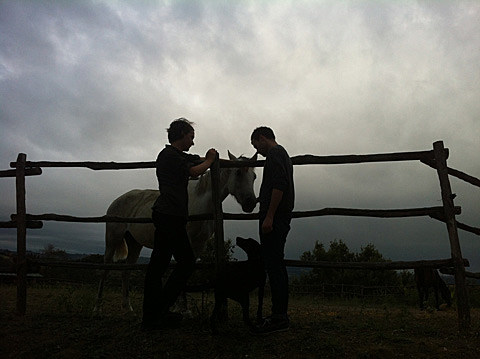 London's Vision Fortune don't make it easy for you. Their 2013 debut, Mas Fiestas con el Grupo Vision Fortune, looked like $.25 bin mariachi record, all its songs were just roman numerals and it was basically just one long, connected droney throb. But it's an awesome long droney throb, not entirely unlike what Liars or Hookworms do and, at high enough volumes, Vision Fortune's appeal becomes apparent. The band have since signed to ATP Records who will release their second album, Country Music, next week (2/10). It's got slightly less confusing cover art and distinct, separate songs (that still segue together) with "normal" song titles... it's definitely a more inviting album, but is still dark, brooding music that sounds best as loud as possible. Again, Liars is a good reference point, or maybe This Heat, but Vision Fortune are their own beast. You can stream the whole album (and their first one) below.

Vision Fortune will be heading across the Atlantic to play SXSW and will hit NYC on the way back for two shows: April 2 at Baby's All Right and April 3 at Palisades with Mind Dynamics and Courtship Ritual. Tickets to both shows are on sale now. All tour dates are listed below.