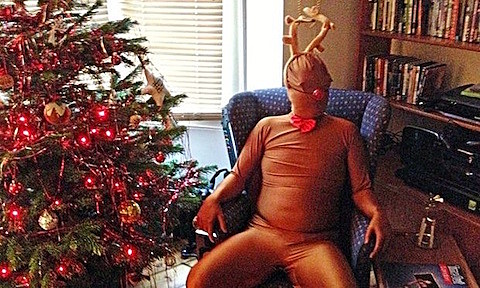 Kitson + Christmas makes perfect sense. This standup-cum-solo theatre-maker is our preeminent storyteller - an art form with Christmas overtones. His work is also unapologetically sentimental, and who, bar the severest bah-humbugger, isn't up for dewy eyes at Christmas time?

That's exactly what his Show for Christmas delivers - brilliantly, sans schmaltz, with big laughs and a thoughtful, heartful engagement with what Christmas is about. You have to doff your Santa hat to the skill, sensitivity and judgment with which this story is put together. And to Kitson's gimlet eye for the minutiae of how people speak and behave, which he fashions here into one glittering bauble after another of dialogue, character sketch, or turn of phrase. - [The Guardian]

The brilliant British comedian and storyteller Daniel Kitson debuted his holiday-themed "A Show for Christmas" in 2014 across a sold-out UK run. He's now bringing it to NYC at the Connelly Theatre from December 8 - 13 and then December 15 - 18. Says Daniel:

The show itself is a simple storytelling affair that is, if you'll forgive me for saying so, pretty enchanting and deals, amongst other things, with the traditional seasonal concerns of loneliness, a brief scuffle in a newsagents, mobile phones, magic, the past and a long journey in a mid sized motorhome.

I mean. It's long been my vibe to charmingly undersell things, as you doubtless know, but I reread it last week to see if I needed to change anything and I actually REALLY enjoyed it.

I think it's really good.

So. There you go.

Tickets for most shows are still available. Get 'em while you can.