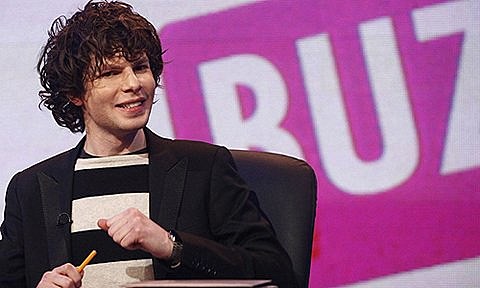 OK. Moving on. The one thing my Anglophilia and its relationship to comedy has taught me is that if you find a single British comedic personality you like you will, after a series of youtubes and googles, discover between 5 - 10 related comedic personalities you will just as quickly fall in love with. This is precisely how I came to discover the great Simon Amstell. My discovery and subsequent adoration of Simon Amstell was set into motion years ago with my obsession with the preposterously underrated and underknown-in-the-US British series Garth Marenghi's Darkplace. The show, written, directed, and starring Matthew Holness and Richard Ayoade (whose birthday happens to be today, June 12th) only lasted 6 episodes. From Wikipedia:

Darkplace is presented as a lost classic: a television series produced in the 1980s, though never broadcast at the time. The presentation features commentary from many of the "original" cast, where characters such as "Marenghi" (Holness) and "Dean Learner" (Ayoade) reflect on making the show. Darkplace parodies numerous aspects of '80s low-budget television, including fashion, special effects, production gaffs, and music, as well as the widespread practice of including commentary tracks on DVD releases of old films and television shows.

To this day, Darkplace is one of my favorite shows of all time. It was this show that introduced me the the comedic greatness that is Matt Berry. With his deadpan facial expressions and deep, throaty, British voice, I could not get enough of this guy. It didn't matter what he said; his delivery was like nothing I'd ever seen or heard. Brilliance. My next logical step brought be face to face with Berry's (also short-lived) show Snuff Box which he co-wrote and co-starred in alongside American comedian Rich Fulcher. Darkplace also lead me to one of my all-time favorite shows The IT Crowd, which brought Berry on in season two, but which had  Ayoade as one of the main characters for all four seasons. I also became a huge fan of the Mighty Boosh. Incidentally, both Snuff Box and The IT Crowd are streaming on NetFlix. I will admit that season 1 of The IT Crowd is a bit slow going, but starting with episode 1 of season 2 the show absolutely explodes with hilarity.

OK, at this point you are either asleep or poking your eyeballs out with a pen wondering what the hell this complicated British Comedy family tree has to do with how I came to discover Simon Amstell. Well, I'll tell ya how. On one of my famous long-form YouTube search sessions, I was looking at Mighty Boosh stuff, which led me to look for some Noel Fielding stuff which eventually led me to clips of the TV show Nevermind the Buzzcocks which happened to be hosted by SIMON AMSTELL. Ya see! It was convoluted, but I got us there! [Ed note: 'Buzzcocks' is/was a "game show" with a mix of music, comedian and actorly contestants that was basically an excuse to make fun of pop culutre and celebrities in general. I was a big fan of the Amstell reign too. -Bill]  In the clips I was watching, Simon was an extremely sharp, fast, hilarious, and unbearably likable host. His rapport with the panelists was so genuinely funny, clever and very very loose that, in true Klaus fashion, I decided I wanted to know more about this guy. In short, he is a BAFTA-nominated, award-winning English comedian, television presenter, screenwriter and actor, best known for his roles as former co-host of Popworld, former host of Never Mind the Buzzcocks and co-writer and star of the sitcom Grandma's House. He is also a stand-up comedian and has been since he was 17.

Amstell is massive in the UK and Australia. He does these comedy tours at huge venues that sell out faster than a Quicksand reunion at the Mercury Lounge (not happening). In the US, however, he is grossly unknown. Which is a shame as I think his material would totally resonate with people like us here in the US and especially NYC. So on that note I am pleased as punch to announce that Simon Amstell is bringing his new show, Numb, to NYC in July! Opening July 10 for a five week run at Theatre 80 on St. Marks, the show will run Tuesday through Thursday nights at 8:00 PM. Tickets are $20.00; a limited number of $10.00 student rush tickets will be available at the Box Office one hour before show time. It's only a matter of time before Amstell becomes the next Ricky Gervais, Eddie Izzard, or Russell Brand so to have so many opportunities to catch his show at such an intimate space for such a reasonable ticket price is something for you to jump on, if only to one day have the vanity to declare "Yeah I saw Amstell in a wicked small room in NYC back in the day. I am so cool man, I was there on the cutting edge and I saw God, Jack."

Below are a few Amstelt-related clips, including the infamous Amy Winehouse appearance on Buzzcocks.

Clip of Amy Winehouse on Nevermind the Buzzcocks