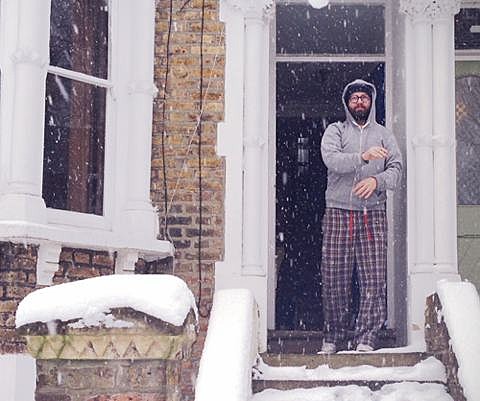 BV commenters; love it or shove it, they are a necessary evil. Sometimes, when they take a break from shitting on everything, a ray of sunlight cracks through the clouds and someone posts a super-hot lead. And, by Cod, yesterday my post about a Reggie Watts / Daniel Kitson 826NYC benefit at the Bell House certainly managed to part the clouds. For one lone commenter dropped the bombshell that Klaus-favorite Daniel Kitson has a 7-show residency at the Barrow Street Theater from July 7 through July 13 at 10:00pm each night. I would only very apprehensively call Kitson a stand-up up comedian as I find his style more (hilarious) monologue. Yet, to my surprise, this particular show is called Something like a Stand Up Show.

This is a very specific point in time.

I've been waiting to have the idea for this show for weeks, for months. A space held open in my head waiting for the idea. For months. I've done previews and I've booked the tour and I've stared at the internet and I've made chicken and I've tried not to worry. But the idea has not come and I have worried. I've worried and doubted and waited more and more and more. But then today, having dropped my dad off at the train station and met my friends for some coffee, Whilst driving home to write this (very overdue) brochure copy - dreading the thought of heaving half lies and optimistic promises into something vaguely intriguing but not developmentally restrictive - half way home, it happened. Somewhere between East London and South London - It arrived. The Idea. Just like that. Like a child, late home from school, oblivious to the worry and the panic and the phone calls. It just walked in and sat down like it wasn't even a big deal. So now I'm typing this in my bedroom because the boy who lives next door is playing the James Bond theme on what I assume to be a trumpet.

And you have to trust me.

Two hours ago I didn't have the idea. Now I do. And it's going to be good.

Kitson is a tornado of brilliance and completely in a class all his own. Nobody comes close to bringing to a performance what he does, so when he graces US soil with a show it cannot be missed. Tickets are on sale now so get em while you can because pretty soon they are all gonna be gonezo. And don't forget to catch him at the Bell House on July 10th too.