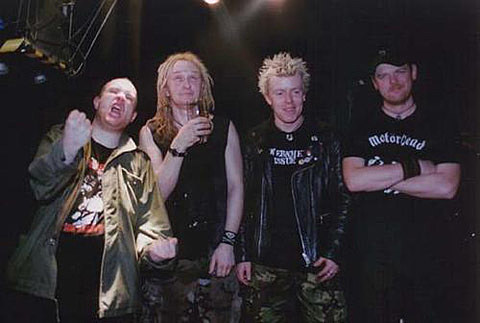 Doom were an English crust punk band from Birmingham, England, whose first, influental lineup were together from 1987 to 1990. Despite its short existence, the band is considered pivotal in the rise of crust punk, a style within the punk rock subgenre that fuses extreme metal with anarcho-punk. They recorded for Peaceville Records and are cited as an early precursor to the grindcore style of heavy metal music. Doom were also a favorite of BBC Radio DJ John Peel. -[Wiki]

As we knew, Doom have reformed again and is scheduled to play Maryland Death Fest and Chaos in Tejas. Now comes word that the UK crust legends will fill the holes in between, adding Europa on May 27th with Dropdead, Teargas, and others. Tickets are on sale. The full tour schedule is below. Dropdead recently played the A389 Anniversary show in Baltimore with Integrity and a host of others.

In related Maryland Deathfest bands on the road news, a pair of great all ages metal shows have popped up at Shea Stadium recently. May 20th will see death metal from Deutchland as Defeated Sanity team up with the great Dysrhythmia and Andromorphus Rexalia. The show is one of two scheduled for Dysrhythmia in the near future. March 11th will see them at Union Pool.

The next day at Shea Stadium, May 21st, The Kill and Noisear have added a second show in addition to their previously discussed appearance with Cripple Bastards at Public Assembly on May 25th. "Interracial deathgrinders" Copremesis and The Communion will kickstart the show. Speaking of that Cripple Bastards show, the bill just got a little more impressive with the addition of Shitstorm (mems Torche, Capsule, ex-Kylesa).

They must love us! After playing Death By Audio last weekend, oddball doom faves The Body will play Union Pool on February 22nd with Braveyoung and one more TBA. The show is one of two NYC shows scheduled for the band, as they will also team up with Unearthly Trance and Whitehorse (!) to play the Acheron on 4/1 at the tail end trip back from SXSW.

Not quite metal, but Jarboe has scheduled an NYC show at Europa on March 24th with Vampilia. Tickets are on sale and the show is Jarboe's only current tour date. No word on who will join Jarboe on stage, as both Nick Palmirotto and Fade Kainer (members of her band, along with Erik Wunder) will be on tour with their respective bands (Hull & Batillus). Hull & Batillus play The Studio at Webster Hall two days later (3/26) with Caltrop, tickets are on sale.

In other metal related news, the facade know as Sepultura (Andreas Kisser is the lone original member) rolls into town and the band is hitting the road for a string of dates that include Gramercy Theater on 4/25. Tickets are still available. They'll be joined by Keep of Kalessin, Bonded in Blood, Neuraxis, and Hate. Full tour dates are below.

Atheist will play Santos Party House on March 3rd with A Life Once Lost, the great Revocation, and Last Chance To Reason. Ticket info is forthcoming. Atheist released the well-received Jupiter last year and A Life Once Lost, who recently lost their drummer, have signed on to Season Of Mist.