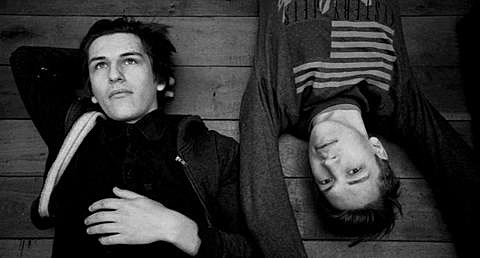 The Loveless brothers may also repeat the Nirvana trick of appealing to hipsters and metalheads alike. The brutish riffs that power Bloodsports and Backwaters drip with the sardonic, malign intent that is the hallmark of Queens of the Stone Age, while the ultra-chippy Nothing ("I want to do everything you morons say," needles Eoin) thrums with a casual, louche menace.

The songs may be rudimentary but they are also red-raw and urgent. Let's Pretend would be an eight-minute masterclass in misanthropy, were it not for its redeeming black humour, and the closing current single Face Like a Skull captures the essence of nihilistic teenage insouciance. - [Guardian]

Hailing from Sheffield, UK, brothers Eoin (guitar, vocals) and Rory (drums) Loveless formed Drenge about three years ago and just put out their self-titled debut this summer that lies somewhere between post-Nirvana grunge and early '00s garage revival. You can stream a few songs and check out the videos for "Face Like a Skull" and "Dogmeat" below.

The album will get a stateside release on January 14 via Canvasback Media. Around the same time, Drenge will come over for short American tour which includes two NYC shows: Mercury Lounge on January 17 and Glasslands on January 18. Tickets to Glasslands are on sale now; tickets to Mercury Lounge are currently on AmEx presale and go on sale to the general public Friday (11/15) at noon. No openers have been announced for either show yet.

All dates are listed, along with video and streams, below...