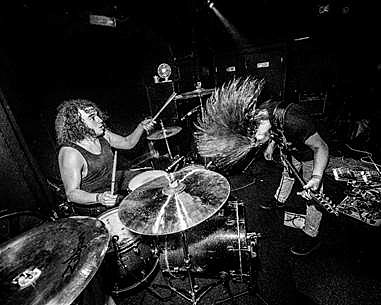 UK rock duo God Damn formed a few years back, and they're now set to release their debut album, Vultures, on May 11 internationally and May 12 in the US via One Little Indian (pre-order). We've got the premiere of its new single "We Don't Like You," a dose of heavy rock that's somewhere between indie rock and metal. Queens of the Stone Age fans will probably dig. Listen below.

God Damn will be in the US this month for a few SXSW shows, and right after that they'll come to NYC to play March 24 at Niagara (112 Ave A) with two local teeth-loving metal bands, Cleanteeth and Marching Teeth.