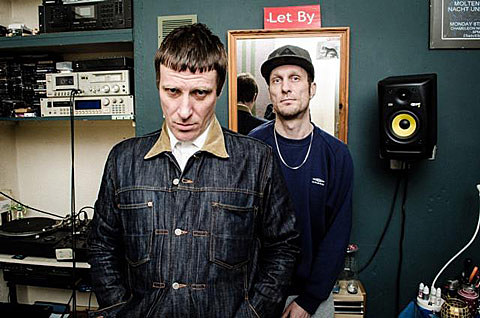 Somewhere between punk, hiphop and spoken word lie UK duo Sleaford Mods. (They are neither mods, nor from Sleaford. They're from Nottingham.) Jason Williamson spews a tapestry of bile over low-tech, muscular backing by Andrew Fearn, the result is somewhere between The Fall, McClusky, Happy Mondays and John Cooper Clark. The pair have been making music for eight years now but really started to get attention with last year's terrific Austerity Dogs and look to go even wider with the just released Divide and Exit. On it Sleaford Mods are in full rebellion mode. Who against? Whadda you got? Like Protomartyr's Joe Casey, Williamson hold equal contempt for the rich, conservatives, liberals, phonies in general, idiots, "jolly fuckers," etc all via a nonstop torrent of brilliantly, hilariously profane lyrics. You can stream Divide and Exit in full below.

For more on Sleaford Mods, the album was recently reviewed at The Talkhouse by Luke Haines (of Autuers and Black Box Recorder, who we just interviewed). It's a great read, here's a sample:

The fucking words are all over the Sleafords' newest, best and most brutal album so far: Divide and Exit. Relentless words. Incontinent. Fucking everywhere -- like a madwoman's shit. Scatological, psychotic, sociopathic, wise, even. The words only stop when Williamson runs out of breath, just in time for Fearn to play a super-dense retardo keyboard solo, or the stupidest riff that anyone has ever come up with. (Riffs that, by most people's standards, would have been discarded as "useless.") In Sleaford Mods' hands even the most pony riff is gold. And the words keep coming: "I ain't no mouthy baker/The cake ain't for me/A four-pint punter in the Chinese." There are drugs everywhere, mainly bleak ("bleak" is a very Sleaford Mods word) -- tales of crap gack, crap crack, and crap smack. Everything is bleak in Sleaford Mods' world, everyone is below the breadline and almost everyone is a cunt. It's also very funny and surreal. "Findus crispy human finger... 100% cod. Fuck off!" or "The Prime Minister's face hanging in the fucking clouds, like Gary Oldman's face in Dracula." There's even an excellent ditty about clothes designer Paul Smith ("Smithy"): "Sir Paul, you can find binspiration [sic] in everything/The recyclable black bins of dog shit an angel sings." From the poetic, to the scatological, to the banal: "I waste time flicking bogeys," ponders Williamson philosophically. I don't want the words to ever end.

Sleaford Mods have yet to invade North America but hopefully soon. Until then, stream the new album plus check out other videos and streams, below...