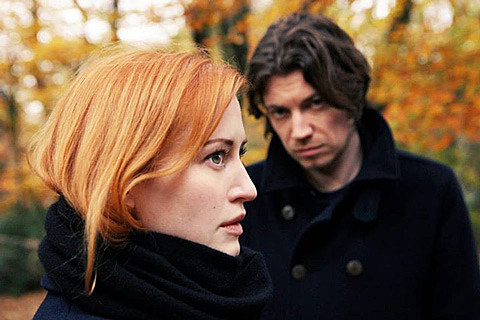 UK duo The Rails are Kamila Thompson and James Walbourne. Kamila is the daughter of Richard and Linda Thompson and has played with Bonnie 'Prince' Billy, Teddy Thompson, Sean Lennon and various members of the Wainwright clan. Walbourne has been a guitarist for hire for the last two decades, playing with Death in Vegas, The Pernice Brothers, Son Volt, Ray Davies and is a current member of The Pretenders and Chrissy Hynde's band (who The Rails toured with last year). They are also husband and wife.

As the Rails, Thompson and Walbourne recall '70s-era spare / twangy singer-songwriters, be it Graham Parsons, Emmylou Harris or acts on Island's pink label period (John Martyn, Fairport Convention, etc). In fact, when The Rails signed to Island, the label reactivated its pink label for their gorgeous Bernard Butler-produced single "Habit," and Edwyn Collins-produced debut album Fair Warning which made Rough Trade's Best of 2014. You can stream "Habit" and the album (via Rdio) below.

The Rails are currently on the East Coast, having played NYC's Joe's Pub last night (David Byrne was there). Tonight (2/4) they play Philadelphia's World Cafe and then it's back to NYC on Friday (2/6) to play The Living Room with Olivia Chaney. Tickets for The Living Room show are still available.

A video of The Rails' "Bonnie Portmore" and song/album streams are below...