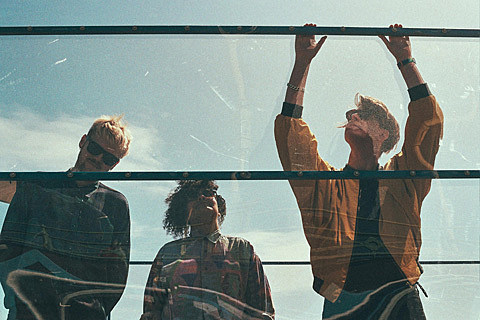 London trio Shopping formed in 2012 and make scratchy, minimal post-punk that recalls such acts as Delta 5, Raincoats, Au Pairs, and Joseph K. Shopping get the sonics, urgency and tension right, and don't forget to pack things with memorable hooks. (Members Rachel Aggs and Billy Easter played in, respectively, Trash Kit and Wet Dog which both had a similar MO.) The band's debut album, Consumer Complaints, came out in the UK last year and was just released in North American last month via Fatcat. You can stream the whole record below.

Shopping will come to this side of the Atlantic to open on Shannon and the Clams' North American tour, which hits NYC on October 16 at Music Hall of Williamsburg. Tickets for that show go on sale Friday (6/19) at noon with an AmEx presale starting Wednesday (6/17) at noon.

Shopping will be in NYC right before that, playing this year's CMJ (October 13-17). Stay tuned for more details on those shows. All dates are listed below.