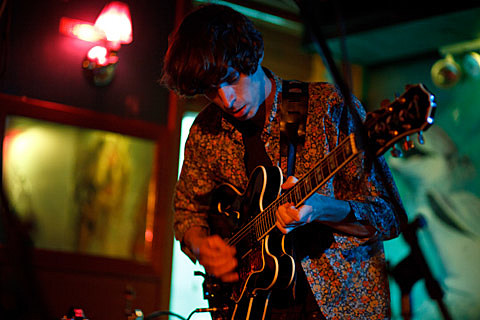 Ultimate Painting, aka Jack Cooper from Mazes and James Haore from Veronica Falls, released their appealing debut album this year via Trouble in Mind and were last in the U.S. during CMJ. The band will be back in North America this spring to play SXSW and will be touring around it. They'll be opening for Twerps on a few shows, including both NYC ones: March 13 at Rough Trade and March 14 at Mercury Lounge. Tickets for those shows go on sale Friday (12/12) at noon with an AmEx presale begining Wednesday (12/10) at noon.  All dates are listed below.

Jack and James gave us Top 10 lists for 2014 and both said they listened to more songs than albums, at least of new stuff. So we get Top 10 Songs, plus a little commentary/context about their lists. Check those out, along with a stream of Ultimate Painting's album, below...

Jack says : "Haven't been listening to an awful lot of new stuff this year. I've been immersed in Grateful Dead bootlegs and a new found love for jazz. I'm not sure what happened there, but there's been some really great things that have left an impact. The Lonelady song is my current obsession and seems to be on the radio every morning as I wake up. A pretty perfect song. My favourite LP is easily Typical System by Total Control and I continue to be in awe of Mikey Young and his vast output. But yeah... So many great LPs this year that I plan to spend more time with... Eaters, Parquet Courts in all their guises, Dean Blunt, Virginia Wing, Actress, Jack Name and White Fence. Last but not least... Greg Ashley's Another Generation Of Slaves. Seriously, check that one out."

James says: "i don't really listen to many current bands so i'm not the best person to compile a list such as this. but i am, so here it is. Metronomy's 'Love Letters' has all the markings of a classic album. White Fence's 'for the recent found innocent' features both high quality songs and production. Parquet courts also achieved the same with 'sunbathing animal' and Koichi Yamanoha is releasing music under the name 'Grimm Grimm', its excellent and well worth investigating."