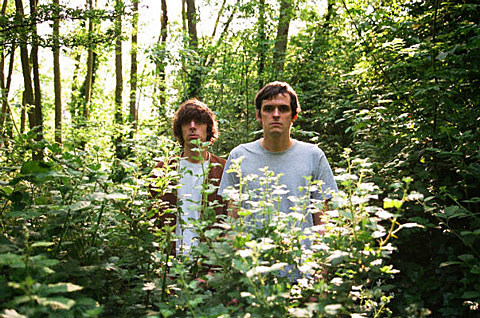 James Hoare and Jack Cooper hit it off when their respective bands -- Veronica Falls and Mazes -- were on tour together and decided to work on songs together. Ultimate Painting was born. Says Cooper:

... we began figuring out where we could take the whole thing and what sort of music we'd like to make. Demos were exchanged and we hit on some synergy in the songs we were sending each other. After a fairly disastrous first attempt at recording, we reconvened and recorded what became the song 'Ultimate Painting', a vague theme song for the band... everything began to fall into place; us both singing and playing guitar, me playing drums and James playing the bass. Our ethos was; if it wasn't working, don't push it; so some sessions ended before they began... oh and the music won't be touched my anything digital till it needs to go online or something"

The result is Ultimate Painting's debut album which will be out this fall on Trouble in Mind. The record has a clean gentle vibe, showcasing the pair's ear for melody and understanding of the understated (think VU, The Bats, Jonathan Richman). Ultimate Painting's "vague theme song" will be the first single and it makes its premiere in this post. Stream it below.

Ultimate Painting will be getting some quick exposure as openers for a few dates on Parquet Courts' UK tour. Those are listed below.

In other news, Hoare's other other band, Proper Ornaments, will release their second album, Wooden Head, on July 8 via Slumberland. This new one is a little more volumized than last year's terrific debut, Waiting for the Summer, but still with a lazy pastoral bent. Stream "Magazines" from the new album below.

Also: if you missed Mazes' 2013 album Ores & Minerals it's worth catching up on too (do that via Rdio). Ultimate Painting and The Proper Ornaments streams below...