The Prodigy @ Big Day Out (Keith Photo by Paul Dugdale) 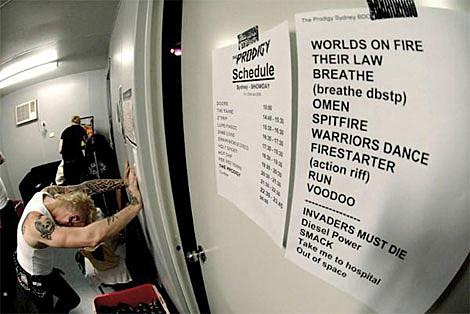 As Showtrotta previously pointed out, The Prodigy are back with a new album, Invaders Must Die - out March 3rd via Take Me To The Hospital/Cooking Vinyl (note that is a new release date). According to the band, "Liam Howlett, Keith Flint and Maxim are all featured on the album, which is the first time since the release of Fat Of The Land in 1997." And this note came yesterday:

We just finished touring australias big day out last night, its been the best tour we have ever done there, absolutely mad....the sydney show was biggest indoor venue we have ever played, 35000 people in there, I couldn't see the fuckin end, it was mega and hot! We also played palace in melbourne for 1800 it was 50 degrees in there, security were using fire hoses into the crowd.....so we want to thank all the ozzys (n kiwis) that supported us and made it a mega tour.....I managed to stay out the sun for 3 weeks mainly coz I was working on new tunes and a remix for a band, I was like a bat - only come out at night! Off to singapore now, should be interesting......liam h

There are North American shows coming too. Already officially announced, The Prodigy will be headlining the Ultra Music Festival on March 28th. Now comes word that the band will also be playing Roseland Ballroom in NYC two days earlier. $42.50 tickets for that show will go on sale Thursday at noon.

All known Prodigy dates below...