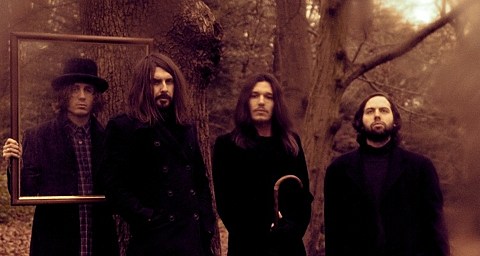 English chemical experimenters and horror flick adorers Uncle Acid & the Deadbeats will be heading west for their first North American tour. The band recently played Maryland Deathfest, but will step foot back in the States and Canada for a full slate of dates. The tour begins on September 24 in Philadelphia and ends October 11 in Los Angeles. On September 26, Uncle Acid drops into New York City's Bowery Ballroom. Support on the tour comes from Danava who haven't been around these parts in a few years. Tickets for the NYC show go on sale Friday, June 27 at noon.

The Cambridge doomers released their third full-length, Mind Control, in 2013 and followed it with the single "Mind Crawler" that was backed by a Charles Manson cover. In addition to the forthcoming tour, the band will be playing a host of festival dates, including Jalometalli 2014 in Finland which is headlined by another soon-to-be-Stateside-traveler, King Diamond.

All of the dates along with the video for "Mind Crawler" and a live Danava video, below...