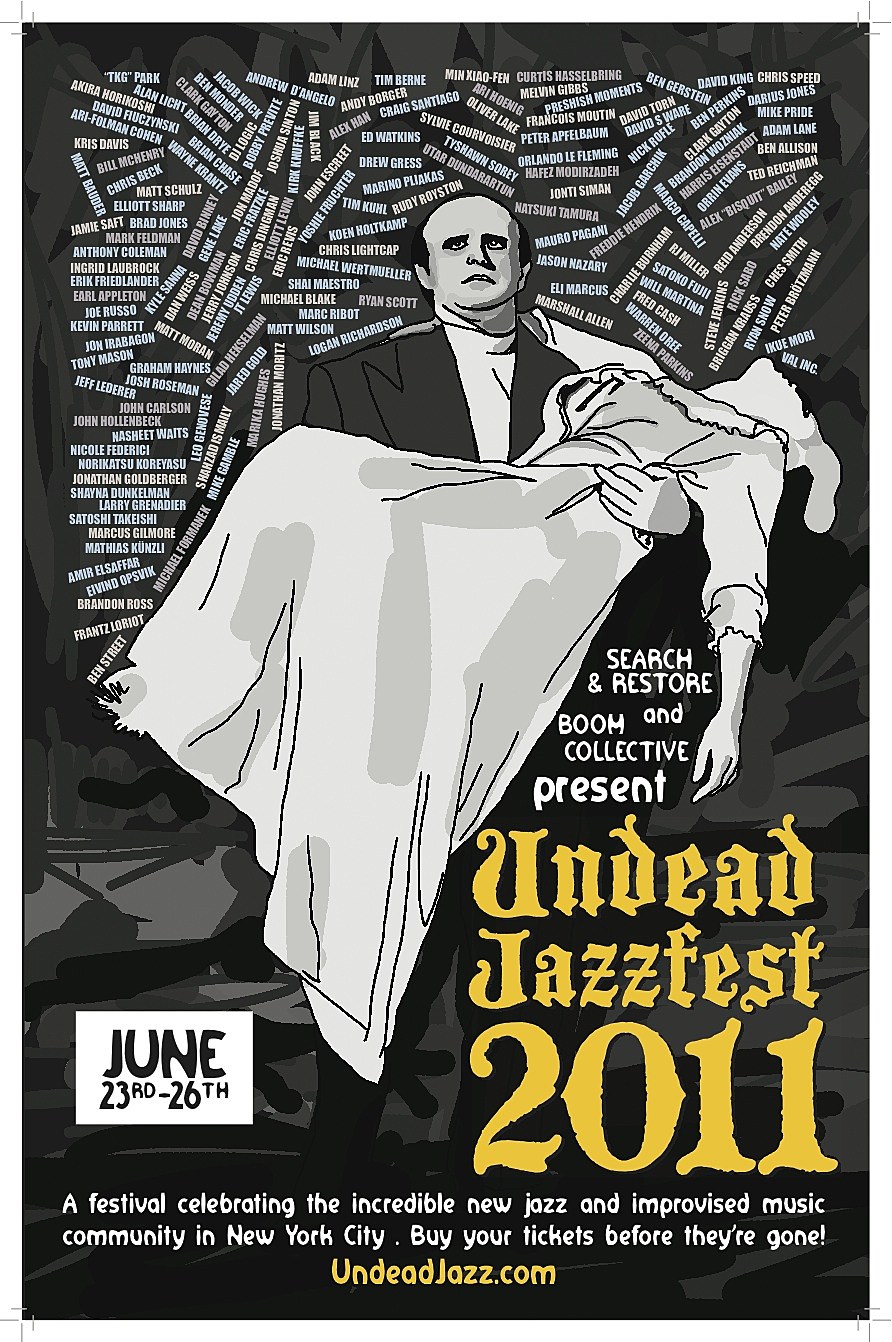 As announced a few months ago, the four-night Undead Jazz Fest kicks off tonight (6/23) with music at Le Poisson Rouge, Sullivan Hall and Kenny's Castaways. The format is similar to that of the Winter Jazz fest (and the inaugural Undead fest last year): one ticket that covers entry to a handful of neighboring venues. This year, each night offers something a little different.

Saturday the music will be in the Gowanus/Park Slope area (at Littlefield and unconventional spots Homage Skateboard Training Facility and Cross Fit) where you'll be able to see Elliott Sharp (playing Thelonious Monk), David S. Ware, the Darius Jones Trio and more, all on the same Degraw Street block.

Tickets for all days are still available, including four-day and two-day tix.

There are copies of the Undead Jazz Fest Review floating around town that come with an excellent sampler CD, which you can stream below.

We should note that last week, the New York Times published news about an online petition asking for an increase in musician pay for the Undead and Winter Jazz Fests. Initially, it was unclear whether that situation would affect this year's festival (some of the signees are scheduled to perform), but the organizers of the petition have since clarified some points, mainly that they support this year's fest and that they didn't mean for the press to find out about what they thought was a private email, but that they're hoping to negotiate for a pay raise at future fests. Some more info on that is below, if you're interested...

Now that that's out of the way... the fest recently put together a trailer containing one second of music from each artist on the bill. That and the full schedule are below...

ABOUT THE PETITION THE NY TIMES REPORTED ON:

The petition does not call for a boycott or any other action. It was not meant as a call to action in regard to the current Undead festival. We have made no other call for strike or boycott. The Festivals' promoters have agreed to meet following the Undead Jazzfest. We certainly hope that we can negotiate an agreement acceptable to all parties without resort to these tactics. We do not feel it is in the interest of either party (the musicians or the promoters) for the Undead Festival to do poorly, and we wish success for this summer's festival. However, fair treatment for musicians is a very real issue that we believe is felt by a great majority of those musicians who are connected with the festivals. Our goal remains to come to an agreement with the festivals that will be in the best interest of all involved.....

We have made no demands regarding next weeks Undead Jazzfest, nor do we intend to make any.

We began circulating the petition because individuals requesting fair pay were told, basically, that if they didn't like what they were offered, they shouldn't play.

Before we could approach the festivals as a group, however, we needed the support of a majority of festival musicians, something we are now confident of achieving through our petition.

We began the circulating the petition now because the promoters have already begun to book musicians for the 2012 Winter Jazz festival. We know that it will be more difficult for the promoters to negotiate terms for Winter Jazz 2012 once their budget is set and individual artists' contracts are in place. we needed to circulate the petition this month in order to begin negotiations before the promoters budgets are 'locked in'.

The choice to publicize our effort at this time was not ours.

On the contrary: we sent the petition only to musicians directly involved. We didn't do a mass mailing for our own 'community support' petition precisely because we wanted to avoid publication before we had a chance to meet with the promoters.

Nate Chinen of the New York Times apparently received a copy of our outreach letter from a festival musician- and accessed the petition web site through that letter.

Although the petition is technically 'published' on the web, the web address itself was only distributed to musicians directly involved via email. To our knowledge, neither Mr. Chinen nor anyone else from the press or general public is claiming to have found the web site by any means other than through reading a private email sent to a festival musician. Mr Chinen contacted our representative, Shane Gasteyer at local 802, on Wednesday, June 15, 6:24 PM, asking for confirmation and response. The following day, Jun 16, at 5:24 PM, Shane wrote back, telling Mr Chinen that we would respond by Monday, during which time we had hoped to set up a meeting with the festival's promoters to discuss the possibility of a joint response.

However, c/a 20 minutes later, at, 5:43 PM Nate Chinen replied that he had already published the story.

Please direct all further questions about the decision to publish this story the week before the Undead Festival to Nate Chinen at the NYTimes. [From petition response to press]