The improvisationally-oriented Undead Music Festival is back for another year, happening May 1 - 5 in NYC. The fest, which has expanded beyond its jazz beginnings, overlaps a bit with Red Bull Music Academy's NYC takeover that begins on Sunday (4/28). The first Undead event is the previously mentioned, now sold-out "Night of Improvised Round Robin Duets" happening at Brooklyn Masonic Temple on May 1 featuring Questlove, Andrew WK, James Chance, Julia Holter, Kim Gordon, Thundercat, Andrew Bird and more. More info on what this all entails:

The format? Simple. One musician starts a solo improvisation lasting five minutes. Another musician then joins him for five minutes of duo improvisation. After those five minutes, musician #1 leaves the stage and musician #3 joins musician #2 for another five minutes, and so on and so forth for two hours. The music? Expect the unexpected. A once-in-a-lifetime experience with 20+ artists from jazz, electronics and everything in between...

Then on May 2 - 4, it's "Three Nights of Dosh" at Shapeshifter Lab featuring drummer/multi-intrumentalist Martin Dosh collaborating with a host of other musicians (including pal/collaborator Andrew Bird for one of them):

MAY 3:
8pm Aaron Parks solo
9pm Martin Dosh + Aaron Parks, Chris Morrissey, Jeremy Ylvisaker
("Due to some unique circumstances, Dosh will be participating in this night via skype. It's going to be wild.")

Individual tickets are $15 for individual nights or $30 for all three.

There are more Undead related events happening on May 5 in other parts of the U.S. and there's more info here. For more info, visit the Undead Music Festival's website. Flyer is below. 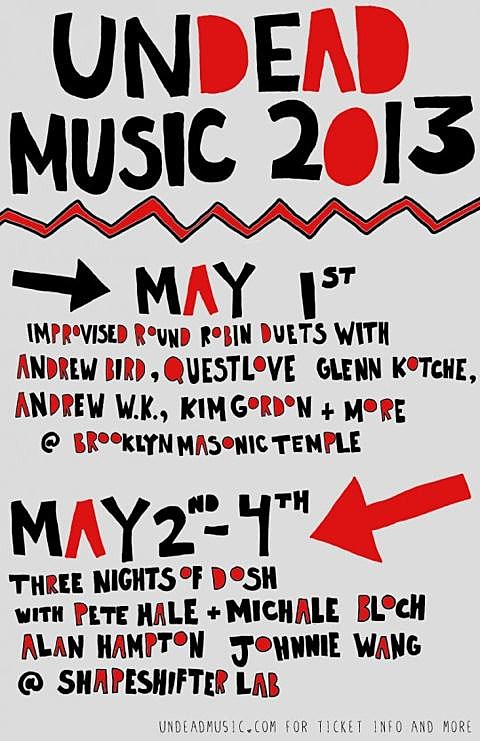