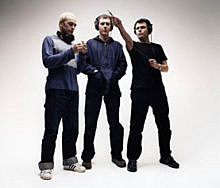 "Underworld are currently recording their fifth studio album, expected to be released in the autumn of 2007. A single from the new album should be released in spring 2007. A full world tour is currently being planned to support the new studio album. Currently, tour dates in Europe and the United States have been announced, with more expected." [Wikipedia]