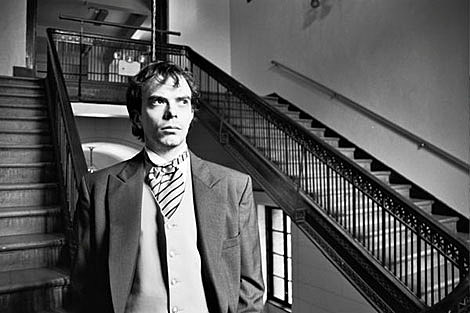 New Amsterdam Records is putting on Undiscovered Islands, a month-long exhibition of work by label artists and friends at Brooklyn's Galapagos Art Space (16 Main St in DUMBO). The series' four Friday shows start May 8th. Tickets are on sale now.

The lineups include two record release shows: one for Darcy James Argue's Secret Society's Infernal Machines on Friday, May 8th; and another on May 15th for Nadia Sirota's first things first. Sirota will be appearing with the Chiara Quartet, itsnotyouitsme, Clarice Jensen, Nico Muhly and others.

The final Undiscovered Islands of the month will feature NOW Ensemble and Abigail Fischer premiering Missy Mazzoli and Stephen Taylor's "Song from the Uproar" followed by a preview premiere performance of William Brittelle's Television Landscape on Friday, May 29th. New work Television Landscape is described in the release as "a fully-notated concept album that brings together the epic tradition of Pet Sounds, Purple Rain, and OK Computer with Brittelle's idiosyncratic... compositional style."

Signal performed Michael Gordon's Trance at (Le) Poisson Rouge on April 21st, with Lubman conducting. The group will play that piece again, for free this time, at the Bang on a Can Marathon, scheduled for May 31st at the WFC Winter Garden. So Percussion, who played with Signal during its performance of "Music for 18 Musicians" last September at LPR, didn't join the group for Trance. Instead, the So Percussion recently performed at the Kitchen with Matmos and PLOrk, at Carnegie Hall as part of In C, and most recently at the Look & Listen Festival last weekend (Saturday, May 2nd). The So Percussion/Matmos/PLOrk thing is happening again at Princeton on May 16th. Ticket are on sale. 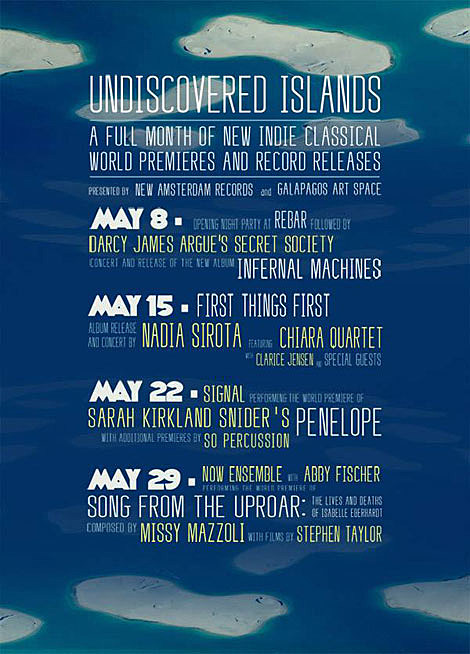 Darcy James Argue's Secret Society is a "powerful and well-stocked" (New York Times) 18-piece steampunk bigband that envisions an alternate musical history, wherein the massive dance bands that ruled the Swing Era never went extinct, instead remaining an integral part of the musical landscape straight through the present day. The group is directed by Darcy James Argue, who was recently hailed as a "jazz great of tomorrow" by Ben Ratliff of the New York Times, and was picked as one of five "musical voices to watch" in 2009 by Time Out New York. His music effortlessly blends contemporary large ensemble jazz composition with dusky postrock textures and intricate postminimalist rhythmic patterns. See below or click here for more information on Infernal Machines.

May 15 (8:00 PM): Nadia Sirota and friends, celebrating the release of her debut recording, first things first.

Hailed by Time Out New York as one of New York's "brightest, busiest players," violist Nadia Sirota is well-known for her unique interpretations of new scores and for commissioning and premiering works by some of the most talented composers of her generation. Her incredibly diverse musical life as a collaborative musician includes regular work with The Meredith Monk Ensemble, Alarm Will Sound, ACME (the American Contemporary Music Ensemble), yMusic, and the Wordless Music Orchestra, as well as with such songwriters and bands as Max Richter, Johann Johannsson, Stars of the Lid, The Swell Season, Sam Amidon, Doveman, Bryce Dessner, Gabriel Kahane, and Valgeir Sigurdsson, and on new and recent albums by Grizzly Bear, Ratatat, Doveman, and My Brightest Diamond. For her debut album on New Amsterdam, Nadia has chosen works by three of her closest collaborators, composers Marcos Balter, Judd Greenstein, and Nico Muhly, each of whom writes music that showcases a different side of her thoroughly diverse and multifarious musical personality. At Galapagos, Nadia will be joined by a host of special guests, including cellist Clarice Jensen, the Chiara Quartet, itsnotyouitsme, and composers Caleb Burhans, Judd Greenstein, and Nico Muhly. See below or click here for more information on first things first.

The ten songs of Sarah Kirkland Snider's Penelope, a 50-minute song cycle for voice and chamber ensemble, come from the music/theater work by the same name written by Snider and acclaimed playwright Ellen McLaughlin, and loosely tell a story: a woman's husband appears at her door after an absence of 20 years, suffering from memory loss, a veteran of a modern war; she reads him The Odyssey, and in the journey of that book, she finds a way into her former husband's memory and the terror and trauma of war. The beautiful and engaging songs of Penelope were written by Snider, whose music The New Haven Independent called "indeterminately elegiac, or just plain lovely," and inhabit a darkly nostalgic sphere, suspended somewhere between classical, chamber folk and postrock. Signal is a large ensemble comprising some of the most gifted and innovative musicians based in New York, devoted to presenting a broad range of new music with energy, passion, and virtuosity. The ensemble features guest artists Rachel Calloway on vocals and Steven Mackey on electric guitar, and performs under the musical direction of acclaimed conductor Brad Lubman, who founded Signal along with cellist and co-artistic director Lauren Radnofsky. Penelope was commissioned by the J. Paul Getty Center and will be released as an album by New Amsterdam Records in Fall 2009.

May 29 (8 PM): The world premiere of Song from the Uproar, written by Missy Mazzoli in collaboration with filmmaker Stephen Taylor, with soprano Abigail Fischer and NOW Ensemble. Also on May 29: a preview premiere of Television Landscape, the expansive new project from William Brittelle.

Song from the Uproar, a 40-minute work for ensemble, voice, electronics and film, is inspired by the life of nomadic adventurer Isabelle Eberhardt, a fiercely independent individual who gave up a middle class life in Switzerland to live, often dressed as a man, among the opium smokers and nomads of 19th century Northern Africa. The sung text, compiled from journals discovered after her death, tell the story of her tormented childhood, her travels to Africa, her secretive religious experiments and her mysterious drowning in the desert at age twenty-seven. The films are a formal recasting of archival materials and home movies from the 1930s, reflecting on various themes that Isabelle explores in her diaries, letters, and stories. Song from the Uproar gives the audience a glimpse of the life of this extraordinary individual, and shows her unexpected connection to our modern lives. The work pairs the acclaimed, genre-bending composer Missy Mazzoli with wonderfully eccentric filmmaker Stephen Taylor, along with the striking and versatile soprano Abigail Fischer and NOW Ensemble, the dynamic indie classical quintet that New Yorker critic Alex Ross called "a deft young group gaining attention". William Brittelle's Television Landscape is an eventual 45-minute, fully-notated concept album that brings together the epic tradition of Pet Sounds, Purple Rain,and OK Computer with Brittelle's idiosyncratic, "totally electrifying" (Time Out New York) compositional style.