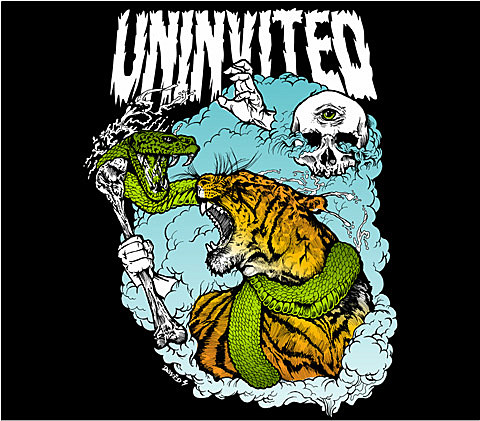 Uninvited Festival will be kicking off on September 18 - 21 at Brooklyn's Nihil Gallery. The festival promises to bring together skate sessions, art, and a loaded lineup of metal that includes stoner favorites Weedeater, Orchid, Elder, SubRosa, and many, many more. Tickets for each day of the event are available now. The full list of bands appears below.

According to the Uninvited Festival's About section, the event's itinerary is as long as the bill. Skate sessions will take place "on an undisclosed sponsored ramp." Bands will play on an "undisclosed sponsored stage." The Nihil Gallery will host an art exhibit tying the themes of the event together. And at night the gallery "becomes a cinema, showing relevant films on big screen and offering a place to relax." Afterwards, "a DJ will take over and Nihil Gallery becomes an afterparty until daybreak." All of it reads like a dream pitch instead of a settled and scheduled fest, which may account for why it's seemingly coming out of nowhere.

Regardless, the bands Uninvited have curated are impressive. Aside from those mentioned above, September 18 includes Mothership and reformed hardcore band Bl'ast. September 19 features appearances by the touring Black Cobra and Lo-Pan (who also play Saint Vitus on September 18 for an Invisible Oranges-presented show). And the weekend continues bringing the riffs with the Shrine, Lecherous Gaze, Electric Citizen (who were recently confirmed for Roadburn 2015), and breakout band Secret Cutter.

The complete lineup is listed, along with the Uninvited Festival's flyer, below...