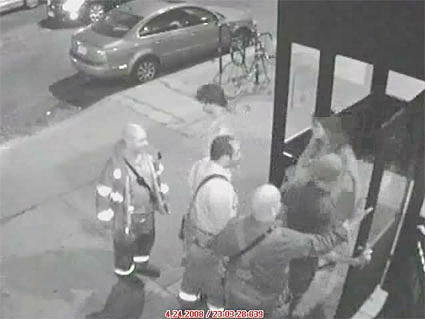 The ongoing controversy over Union Hall bar in Park Slope is tearing apart the local community board as it heads towards Wednesday's vote on the popular nightspot's liquor license amid charges that one of the bar's opponents has a conflict of interest and another opponent made a false 911 call.

Infighting has riven Community Board 6 since last week's contentious committee resolution that urged the State Liquor Authority to deny the bar a renewal on its license unless it reduces the alleged noise that upsets many neighbors between Fifth and Sixth avenues.

But one of the supporters of that May 8 resolution, which passed 6-2, owns a bar himself -- and is now facing a conflict of interest charge...... [The Brooklyn Paper]

Basically Union Hall lost round one, and this Wednesday (May 14, 2008) is round two at Borough Hall with more board members and more important politicians. If you're interested in supporting Union Hall, you can show up with signs at Borough Hall (209 Joralemon Street, Brooklyn, New York) on Wednesday at 6pm.

Even if Union Hall loses round two, they don't lose their liquor license yet. It is then up to the state to decide what happens. Union Hall wasn't allowed to present any evidence last week. This time they can, and their ammunition includes the competing bar owner voting against them, and the Union Hall surveillance video that I've embedded below....

Exhibit A is video footage from the bar's security cameras showing the bar on April 24 when a neighbor, a vocal critic of Union Hall, called 911, saying the bar was over-capacity.

On the tape, which is based on surveillance footage made available by the bar, opponent Jon Crow apparently enters Union Hall at 9:36 pm and quickly leaves. Later, at 10:34 pm, he returns to the bar's entrance and leaves. At 10:54, according to records shown in the film, he called 911 to report "overcrowding conditions."

The FDNY arrived, but found no such conditions. Images show that it's a busy night -- people are gathered around the bar and patrons were playing bocce on two courts in the back but it's hardly teeming, suggesting that complaints have been overstated.

As a result, according to the people who put out the film, which is on the Web site of another local bar, the now-defunct Magnetic Field, the FDNY reported Crow to the fire marshals, apparently for filing a false report. [The Brooklyn Paper]