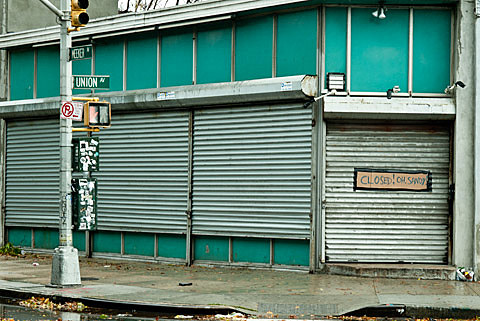 Are you going stir crazy? Most shows are cancelled, but there are some options in Williamsburg tonight. As of 1PM today (10/30), Union Pool has been open for business. So head on over but remember, only one per bathroom due to excess "debauchery". Jonathan Toubin just tweeted, "@UnionPool & i just decided to throw a FREE party tonight to bring everybody together & make them feel better. i'll turning the soul stuff." UPDATE: here's more info.

Halloween (10/31) is on and poppin' for Union Pool as well, when the venue will host a covers show by the Union Ghouls, that features members of Polygamist, Mutant, Supremacy, Sun Ladders, Weeknight, Reni Lane, Public School, Riverwilde, and Gentlemen. They'll be performing songs by Black Sabbath, Nancy Sinatra, Wire, Suicide, AC/DC, and Celtic Frost. The party is free and starts at 8:30 PM.

Elsewhere in Williamsburg, Glasslands will also be open tonight (10/30) for "The World's Premier Alternative Rock Band Kerosene Hat" that features Miles Benjamin Anthony Robinson and members of MGMT, Amazing Baby, Suckers and more is still a go. Heems from Das Racist will DJ. Doors are at 9 PM, $7 to get in.

Glasslands is also throwing a Halloween covers party on Wednesday (10/31) with a bunch of different (surprise) bands playing, choosing songs by:

$5 gets you in to that party which is brought to you by New York Night Train. More info here.

Around the corner at Death by Audio, they're also doing a Halloween cover bands show that is still on that features:

Sleepies (w/mem of Eula) as The Pixies
Mr Dream as Siouxsie and the Banshees
Acid Problem as The Ramones
Heavens Gate as Joy Division
The Go-Guh's (mems Moonmen on the Moon, Man, Paper Fleet, I'm With Cupid) as The Go-Go's

Cameo will be open on Halloween too, hosting both Big Terrific comedy show on Wednesday early, and then later The Hold Steady's Dan Neustadt and some of his friends will be covering Michael Jackson's Thriller in its entirety, part of his "Off the Record" series.

Big Freedia at Brooklyn Bowl is also still happening as of this post. Same with World Inferno Friendship Society at Warsaw,