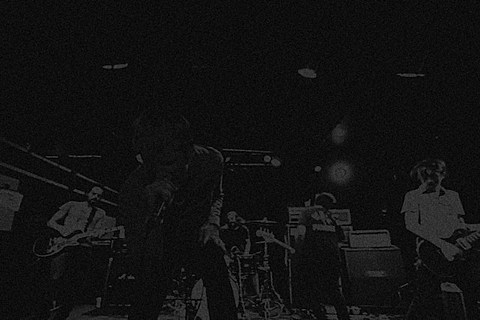 United Nations' tour with Frameworks hits NYC on August 2 at Saint Vitus with Descender and Pagan Girls. Tickets for that show are still available.

United Nations isn't the only thing Geoff Rickly has been up to lately though. The former Thursday frontman also recently re-launched his label, Collect Records. The label was already responsible for releasing the first Touche Amore album (with 6131) and the first United Nations album (with Eyeball), and currently has new 7" releases planned from Touche Amore, Title Fight, Saves the Day and more.

Collect also just released the a-side of the new single from No Devotion, aka the new band of Geoff Rickly (vocals) plus the members of Lostprophets (you may know that Lostprophets' singer is in jail for some unspeakable crimes). The single will be out July 22 but you can now stream "Stay," a track more akin to arena goth than United Nations' searing hardcore. Check it out below.

For those keeping score, Geoff also fronts Strangelight with members of Made Out of Babies, and has a softer solo project.

Stream the new UN and No Devotion songs, below...