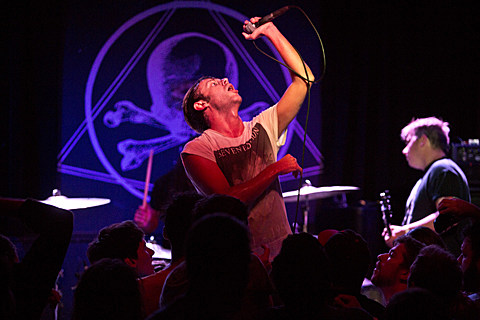 Geoff Rickly's screamo band United Nations have announced two homecoming shows for 2015, one in DC and the other in Brooklyn. Both are with two DC bands, post-rockers Black Clouds (who are Geoff's label, Collect Records) and punks Loud Boyz. The DC show happens 2/28 at Rock & Roll Hotel and the NYC show happens March 2 at Saint Vitus. Tickets for that one are on sale now.

In related news, Geoff's synth rock band No Devotion are currently working on their debut album, and it's being recorded with (now former) Bloc Party drummer Matt Tong, as original drummer Luke Johnson has stepped down. Phil Jenkins from Kids in Glass Houses will be playing with No Devotion at live shows.

Stream some UN, Black Clouds and Loud Boyz below...

Black Clouds - "And Then I Dove"