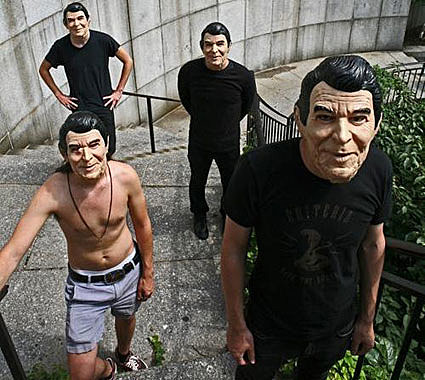 A band of unknowns announced their new self-titled LP to be released on Eyeball Records on September 9th, as well as another EP and a seven inch. Ok, they aren't exactly unknowns... it's just that the true line-up of United Nations ISN'T known. Lets start with the facts.... Yesterday, Geoff Rickly of Thursday sat down with Alternative Press to discuss his new side project, United Nations, a "secret supergroup of mid=90's screamo revivalists"

So who are the members involved with this project, and what do they do in the band? Besides you and vocals, obviously

Well, I actually mostly played guitar and did some of the singing. The rest of the band are in contracts, so they're anonymous.

How did this idea first come up?

I was... This is really weird... I've known a kid named Daryl who plays in Glassjaw for a long time, and we used to go to shows, all the same hardcore shows, and we would get excited about a lot of the same bands. We both really loved what was going on on the West Coast in the early '90s, like Gravity Records stuff, really spazzy stuff. We also really loved the Ebullition style, mid-'90s, what they call the emo power-violence stuff.

So we have some kind-of-but-not-really confirmation that Daryl Palumbo is on board. That in and of itself is not a mindscrambler, but add in the fact that Converge has confirmed that drummer Ben Koller (also of Acid Tiger and ex-Cave In fame) is on board, as well as that message boards / the world's most accurate online encyclopedia are claiming Cooper of Made Out of Babies has joined on, UN takes on a whole new realm of possibilities.

United Nations is streaming their entire self-titled album at their myspace and you can download "The Spinning Heart of The Yo-Yo Lobby" from that record above.

In related Thursday news, Japanese badasses Envy will share a split with the band for Temporary Residence Limited, due on vinyl (with accompanying CD) September 15th. Spanning seven tracks, the record will have four new joints from Thursday and three new ones from Envy. The split was recorded this spring and Thursday enlisted Anthony Molina of Mercury Rev to remix one track, "Appeared And Was Gone", the lead in to Envy's first song. Pick it up at TRL when it drops.... 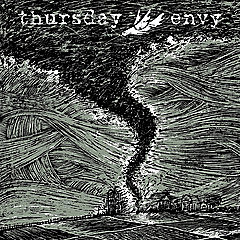 In other Made Out of Babies news, lead wailer Julie Christmas is on board for Spylacopa, a supergroup of sorts that also features Greg Puciato (The Dillinger Escape Plan), John LaMacchia (Candiria), and Jeff Caxide (Isis). The band is currently streaming one song "Out West" at their myspace and will drop their five song debut EP this November on Rising Pulse.

Thursday is currently working on (while twittering about) their new record with producer Dave Fridmann who also helped them out on A City by the Light Divided.

United Nations was inspired by early 90s bands on Ebillution. Portraits of Past (who originally called it quits in 1995) dropped their Discography on Ebillution and have reunited for a pair of shows in NYC this weekend.

The Dillinger Escape Plan recently dropped off a tour with Suicide Silence and are working on a new album.