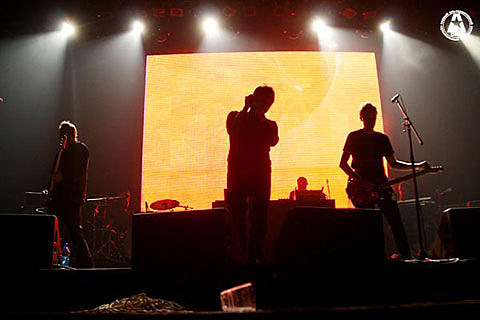 James Lavelle & Pablo Clements will take UNKLE out on the road for a string of dates that will include three US dates (so far) and only one on the east coast. The NYC show is Webster Hall on October 23rd (during CMJ). Ticket info is forthcoming.

The US dates take place a month after Unkle releases their new and chock-full-of-guests EP, The Answer due on September 28th and featuring appearances from Tim Goldsworthy (ex-Unkle, current DFA), Lupe Fiasco, and Sleepy Sun among others. The EP has also spawned a pair of videos including the title track which is directed by The Proposition / The Road director John Hillcoat and features The Departed actor Ray Winstone. View both vids below. Preorder The Answer EP now on limited edition 12" vinyl or limited edition CD, as the physical US release will only be available via the band.

Sleepy Sun will be in NYC at Knitting Factory on 9/6 (tickets). just a few days after they appear at ATP New York (updated lineup).

The Answer tracklisting, a pair of videos, and all tour dates are below...