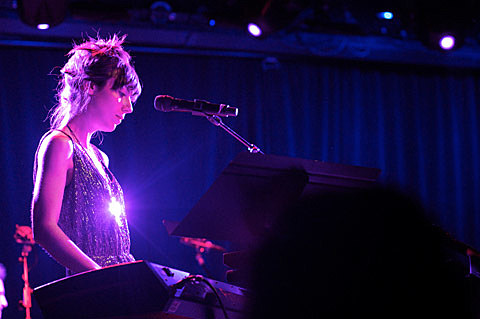 Check out the festival's full schedule, which includes several free shows such as LXMP and Peaking Lights at Lincoln Center's David Rubenstein Atrium on Thursday 19th (both have amazing songs on the comp below). Issue Project Room hosts free day sets Saturday and Sunday (though only tickets for Saturday appear to still be available).

Dark ambient musician and repeat Unsound artist Lustmord recently spoke with Resident Advisor about the experience of seeing someone play a laptop live...

If somebody said "an ambient musician" was playing live in town this evening, I wouldn't exactly rush out, you know? I'd rather stay home and read a book. [laughs]

I hadn't seen them live for a long time, and they played in LA--four middle aged guys on laptops, how boring is that? But, fucking hell, it was one of the best gigs I've ever seen. That's when I really thought, yeah, you can stand there with your laptop and do your thing as long as you got the fucking sound.

Lustmord collaborates with ambient musician Biosphere at an Upper West Side church on Saturday.

Inner Tube were set to play Le Poisson Rouge on Friday, but have been replaced by Mark McGuire (solo). And:

a visual program has been added to Bass Mutations on April 21, showing the ways in which visual artists have helped shape the way we imagine bass music. Curated by "Big Up Magazine" Editor-In-Chief Katya Guseva in collaboration with Dave Q from Dub War NYC, it will take place in a movie theatre adjacent to the dancefloor at the venue for the night, IndieScreen. Live audio from Bass Mutations performers such as 2562, Teeth, Sepalcure, Distal, Throwing Snow and Nguzunguzu will provide the soundtrack.

Stream an excellent playlist of Unsound artists below...