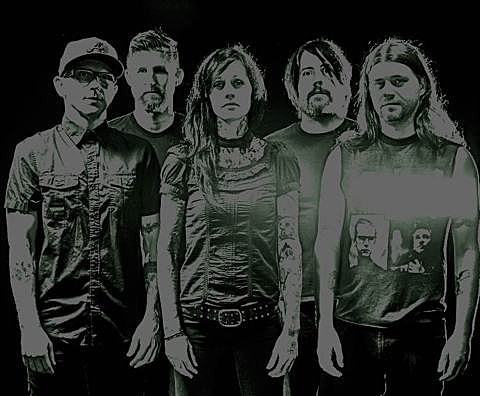 When a bunch of people who've been in other notable bands form a new band together, are we obligated to call them a "supergroup"? That word has some ugly connotations (and looks kinda dumb on the page), but it's also the most efficient stand-in term when dudes from band A get together with dudes from band B and their buddy from band C to form band D, so we're more or less stuck with it. Life is hard, friends.

To hear UnWed tell it, they sound like "Good '90s rock...Hum, Deftones, that kind of stuff; a little of Queens Of The Stone Age vibe going on, too." You can (kinda) judge for yourself with the teaser video posted below, which is their first publicly available music. The recordings it samples come from a 2-song EP that they'll be putting out via No Idea early next year. If you don't wanna wait, they'll evidently have a very limited run of 7" versions available at their first show, which will be at Saint Vitus Bar on December 8 (12/8), along with NJ's Gates, Baltimore's Have Mercy, and fellow post-SBB project States & Kingdoms. Tickets for that show are on sale now.

Stream that UnWed teaser vid below...