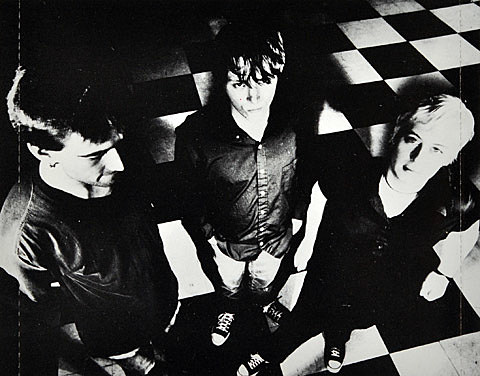 Unwound was a United States post-hardcore band based in Tumwater/Olympia, Washington. Formed in 1991, the band consisted of Justin Trosper (vocals, guitar, songwriting), Vern Rumsey (bass), and Brandt Sandeno (drums), all of whom had previously been in a band called Giant Henry. Brandt Sandeno quit Unwound in 1992 and was replaced by Sara Lund... After Unwound broke up Vern Rumsey formed Flora v. Fauna. Sara Lund formed Hungry Ghost with Andrew Price from the Irving Klaw Trio as well as joining the The Corin Tucker Band. In 2012 Brandt Sandeno and Justin Trosper formed Survival Knife...Unwound have been cited as an influence by many contemporary underground artists, including most notably Blonde Redhead, Mineral, xbxrx, Cave In and ...And You Will Know Us by the Trail of Dead -[Wiki]

Post-hardcore greats Unwound split 10 years ago, but not without leaving a significant mark on the landscape. Those who missed or still miss their live show, can be there vicariously through Live Leaves. Originally slated for release in 2002, the record was culled from shows during the tour for their final LP, 2001's Leaves Turn Inside You. Check out the tracklisting and live video below, and order yours via Kill Rock Stars.

No word on any sort of return to the stage, but until then you can hear the frontman's thoughts on the live material below.

In 2001 we released what was to become our final studio album, Leaves Turn Inside You. It was our most ambitious effort: a double album produced by ourselves in a home studio that we built from the ground up (with much thanks to those who helped us, of course). We decided the best approach to translating the album live was adding some new players to the mix: Brandt Sandeno, Unwound's original drummer and a contributor to much of Leaves, became our live keyboard player; David Scott Stone, an old time compadre from Los Angeles and recent Melvins tour "gun-forhire," our second guitar player. This was no small task. The logistics of adding two members to a band that normally was a three piece was daunting. We weren't quite prepared -- but then again, we rarely were. Unwound was really good at just winging it and barely making it out alive. As we often said, "We'll see what happens."
Brandt started performing in early 2001, before the bigger tours that were to follow. When Dave came up from LA that summer, we practiced hard for a couple of weeks, putting together a set that would represent as many songs from the new album as possible while incorporating a few older pieces we thought would benefit from the new lineup. "Lifetime Achievement Award," for instance, had never been performed live with vocals. "Corpse Pose," a song that featured a signature keyboard riff when it appeared on Repetition, was finally given its due.
To help keep this mess together we hired Dave Doughman, a soundman we'd used on previous tours. Luckily, he was a fellow with a good sense of humor. Not long into the tour, a friend I had met while on the road with the Melvins decided to come along and record all the shows. This was Mike Zeigler, aka "The Kid," infamous Nirvana fan and rock n roll bootlegger. It's his tapes that have been distilled into what you're about to hear.
I'm the first to admit that Unwound was not a consistent live band. Some of the shows on this tour were rough. We nearly broke up two weeks in, after 9/11 threw everything up in the air. You may notice that most of the shows represented on this compilation occurred after 9/11. Prior to that, we had good energy, but we were still working out how to play the songs as a five-piece. Then, for whatever reason, we rocked hard for like a week in the south. Survival instincts kept us alive for a bit afterward, but during the California leg of the tour we self-destructed, and eventually we decided to cancel our European and Japanese tours.
Let's be clear: this compilation isn't trying to rewrite history. Listening through hours and hours of tape from this time, I cringed frequently. But there were also sublime moments where I was touched. Think of it as a gift from us to you -- we did the hard work of culling the good stuff from a few dozen shows. Now you can just sit back and listen (at a loud volume, please). I was often surprised by what I heard; I hope the same holds true for you. Believe it or not, this is long overdue. We'd originally planned on putting this out in 2002! So, if you're an old friend, welcome back. If you're new -- here's to you. Thanks for finding us.

With that: Live Leaves.