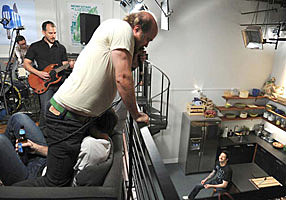 After a successful six-episode run of "Dinner With the Band" that began in November, Rainbow cabler is ramping up its episode order to 10 and teaming it with "Food Party" as an hourlong block.

"Band" teams chef Sam Mason and an indie band, which performs on the show, at a Brooklyn loft. Conversation ensues about life on the road and the food the musicians eat while touring.... Programming block will air from at 10 p.m. beginning April 27. [Variety]

Ten artists will be appearing on the new season, among them Murder City Devils who will be here taping the show during the trip that also brings them to Nokia Theatre (NYC) and Theatre of Living Arts (Philly). Tickets for those (three) shows are still on sale. The full list of 2010 'Dinner With the Band' artists (which you have a chance to be in the audience for), and a video of Les Savy Fav performing on the preview season, is below...