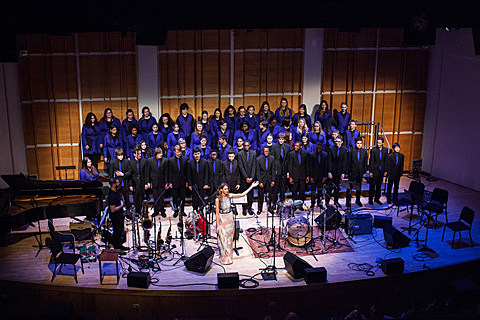 The Brooklyn Youth Chorus have a few performances coming up, and as usual, a couple of them are with notable indie musicians. First, they'll team up with The National's Bryce Dessner for the NYC 2014 Gala Concert on May 20 at The Green Building (452 Union St) which follows the 6 PM cocktails/buffet at 501 Union. They'll be previewing a new work by BYC, Dessner and collaborators commissioned by BAM which will make its world premiere at BAM's Next Wave Festival this year (details TBA). The gala honors Dessner, as well as TD Bank's Peter M. Meyer. Tickets (starting at $375) for the gala are on sale now and proceeds will benefit the Chorus' programming.

Another BYC/indie musician collaboration happens when the Chorus teams up with ambient artist Julianna Barwick for their annual Soundscapes concert, taking place on June 7 at Roulette in Brooklyn. The show will include new music by Julianna, in addition to material from her 2013 album, Nepenthe. Plus, this year's Soundscapes will feature works by Bryce Dessner, Nico Muhly, and Caroline Shaw. Tickets are on sale now.

The same weekend as Soundscapes, BYC also play their annual Spring Sings! concerts at Roulette with one on Friday night (June 6) and two Saturday (6/7) matinees before the Soundscapes show that night.

The Soundscapes concert is part of a few upcoming dates for Julianna Barwick, who is getting her own beer in collaboration with Dogfish Head:

..."I just love Julianna's sonic palette," says Sam. "Her layered style reminds me of the art of brewing. Her songs are beautiful but completely unconventional, just as our beer recipes are completely nontraditional. But in the end, they are both distinct and find an adventurous community of enthusiasts."

The four-song mini-album will be available in a limited edition of 1,000, sold only in sealed cases of six 750ml bottles of the 8% ABV Rosabi. The vivid rose hue of Rosabi comes from a combination of Munich and Caramel malts and a touch of red rice from Julianna's home state of Louisiana. Citrusy Simcoe and Centennial feed Julianna's love of hops, and the star of the showis her go-to ingredient: wasabi. What's hoppy? ... Wasabi. The Japanese root adds bittering and herbal notes similar to hops, with its subtle heat creeping in after the kick of carbonation.

Just make sure the Brooklyn Youth Chorus doesn't get their hands on any, Julianna!

All of her dates are listed below...