"I bought hummus at Costco. Now I have an intimidating amount of hummus. Every time I open the fridge, it eyeballs me. - Kurt Braunohler 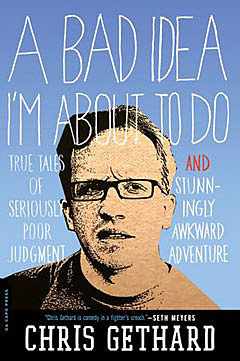 The great Ted Leo closed out 2011 with a bang with sold-out full-band shows at the Bell House on December 30th and then on December 31st at Maxwells in Jersey. The comedically great Kurt Braunohler opened both of those shows, which is why I simply could not resist posting the troll-baiting tweet you see above.

Anyhow, it seems like Ted, aside from the benefit he's playing in Austin, is starting off the new year with a whimper because the Ted Leo calendar has absolutely nothing on it. Blankness. Bupkis. However, your man Klaus knows better. For example, it's a little known fact that Ted Leo will participate in the Rejection Show Music Series at Littlefield on Thursday January 19th at 8:00pm:

The Rejection Show Music Series gives musicians the chance to let loose, take risks, and perform songs that have yet to be heard, have gotten them through a time of rejection, or to simply cover their favorite songs of love, loss, and heartbreak. Featuring TED LEO performing excerpts from a musical that he penned, but has yet to be seen. The musical centers around the United Fruit Company, US corporate and military imperialism, bananas, and of course a love story! CORN MO performing songs based on the theme of Rejection, and more! Hosted by JON FRIEDMAN and featuring the REJECTION SHOW BAND.

Tickets are on sale and are only $8! Oh, and speaking of Kurt Braunohler and Littlefield, catch Hot Tub with Kurt Braunohler on Monday January 9th at Littlefield (aka tonight). Guests include Chris Gethard, John Gemberling, Andrea Rosen, and Matt Oberg. That line-up is as strong as it gets, people.

I just read Gethard's book A Bad Idea I'm About to Do: True Tales of Seriously Poor Judgment and Stunningly Awkward Adventure (pictured above) and it was truly one of the funniest, most brilliant comedian-penned books I've ever read... more on that someday soon, but let me get back on track here...

Back to Ted... Your second opportunity to see Ted is at How Was Your Week? LIVE! on Thursday February 2nd at 8pm at the Bell House. How Was Your Week? is a podcast hosted by the unbearably funny and so f-ing on her game Julie Klausner (love that last name prefix!). This live Klausner experience will feature the absolutely brilliant Best Show on WFMU host Tom Scharpling, the incomparable Sandra Bernhard, as well as house band Ted Leo! There will be surprise guests too, trust me. This show gets Klaus Kinski's This WILL Sell Out guarantee, so buy tickets NOW.