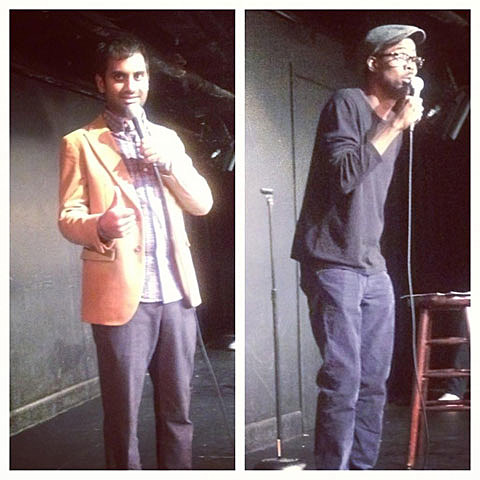 UCB Theater Chelsea's Monday night staple comedy jam session Whiplash still happens every Monday night at 11:00pm. Sadly, for old man Kinski, 11pm is just a tooouuucccchhhhh too late to be out and about galavanting with some of comedy's greatest talents these days. Which is sad, because you never know who will show up to perform, and those who do show up will usually blow your mind. For example, the Monday November 19th installment featured Chris Rock, Aziz Ansari, Simon Amstell and Anthony Jeselnik. Holy.

Chris Rock (pictured above with Aziz at Whiplash), good pals with Louis CK, also recently made a surprise appearance for Louis at his Staten Island Sandy Benefit Shows on November 17th.

But before the next Whiplash, the UCB Theater in Chelsea will be playing host to an awesome Sandy Benefit show on Sunday November 25th at 9:30pm. The line-up is festooned with so many Klaus favorites. $15 not only gets you piece of mind knowing you are helping out people whose lives were turned upside-down by hurricane Sandy, but you get performances by Arden Myrin, W. Kamau Bell (Totally Biased with W. Kamau Bell on FX), Seth Herzog, Dave Hill, Jamie Kilstein, Janine Brito, Kevin Avery, Sara Benincasa, C.F. Lederer, and Chris Gethard (who by the way has a small part in the very last episode of Bored to Death) (I just watched it the other day and was reminded of that important fact). The show will be hosted by Nato Green.

And speaking of Dave Hill and the UCB Theater in Chelsea, prepare yourselves for another fantastic installment of The Dave Hill Explosion which will take place on Thursday November 29th at 9:30pm. Dave's special guest will be Tig Notaro (who recently released a CD via Louis CK) and more. We all know Dave Hill is one of NYC's best comedians, guitar players, and show reviewers, but the Explosion is always a truly epic experience where Dave REALLY shines. The Dave Hill Explosion is a long-running live talk show hosted by Dave Hill. He doesn't do it that often but when he does it's awesome. One of the greatest shows I've ever seen was the Explosion that featured Rufus Wainwright and Dick Cavett. Holy.

Meanwhile you can find Dave Hill TONIGHT (11/24) at UCB East as part of "If You Build It", and check out Dave Hill's latest podcast featuring Chris Elliott. And don't forget that you can catch Chris Elliott at the Bell House on December 7th as part of Ted Leo and Tom Scharpling's epic and now totally sold out Sandy Benefit. You can also see him at the Pit with his daughters Abby and Bridey Elliott on Thursday December 6th at Running Late with Scott Rogowsky.

Hoity-Toity gastro-comedy joint The Stand will be hosting a rather impressive Sandy benefit called MTV Presents Stand up for Sandy on Tuesday November 27th. The line-up features Jim Gaffigan, Wyatt Cenac, Nikki Glaser, Sara Schaefer and Sean Patton. The tickets are a super reasonably priced $20 and are currently on sale. And for those keeping score, Sean Patton and Sarah Schaefer are two of my favorite and definitely underrated comedians in the biz. This might be THE show that gets your man Klaus out of his comfort zone and into The Stand.

Jim Gaffigan also has other bigger area shows coming up.

And speaking of Littlefield, celebrate Christmas Eve there with Wyatt Cenac because it looks like it will be a special night with guests Janeane Garofalo, Michael Che (who also plays the sold out show at Bell House this Sunday), and more already announced. But before that, on Sunday December 9th Littlefield will be hosting Concert & Comedy For Sandy Animals: Benefit for the Sean Casey Animal Rescue with comedy by Michael Showalter and Jena Friedman, and music by Supercute, Casey Shea and more.