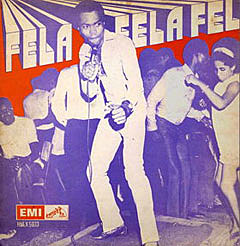 Kniting Factory Records, in the process of reissuing all of Fela Kuti's catalog, is hosting at re-release party for 7 CDs (that contain 14 albums) that they're calling "Na Poi" releases (named after his '72 LP/song) tonight (5/10) at Knitting Factory. It's free and there will be music from the Fela Un-Dustrial Complex DJs.

Other upcoming Fela-related events include the after-party for this year's Obie Awards, which will have Antibalas playing a set at Webster Hall on Monday, May 17th. Tickets are on sale. Fela!, which won an Obie for its Off Broadway run, is nominated for 11 Tony awards this year.

Between those, Antibalas & Fela! band member Stuart Bogie plays with his group Superhuman Happiness at Pianos on Friday May 14th.

And don't forget about Antibalas for free in Battery Park, Femi Kuti at Lincoln Center, and Fela drummer Tony Allen at BAM Metrotech and Stuy Town Oval this summer. 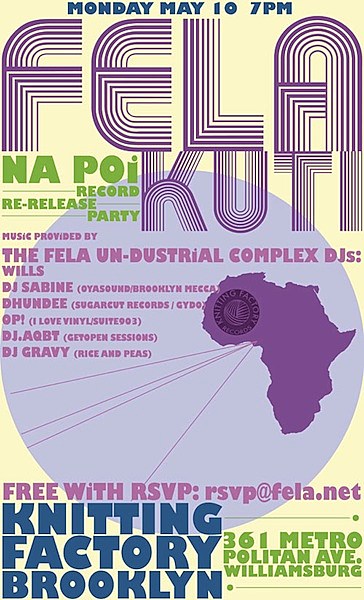