Though it may appear like there's less options than in summers past, there are still lots of great free NYC shows happening. Summerstage and Celebrate Brooklyn have kicked off their 2011 seasons last month, and continue this week. Los Lobos play Prospect Park as part of LAMC with Hello Seahorse! and Zigmat tonight, Friday (7/8), and on Saturday (7/9), a very different type of show will go down when the Brooklyn venue is taken over by Raekwon, Smif n Wessun, and Joell Ortiz.

Summerstage's free hip hop shows continue this Tuesday (7/12) at Crotona Park in the Bronx with Slick Rick and DJ Brucie B, and Central Park Summerstage is hosting free LAMC-related shows too.

In other free hip hop shows news, Pharoahe Monche appears as a guest with the Miguel Atwood-Ferguson ensemble at Harlem Stage on July 8 in Annunciation Park. The show is three days before Pharoahe plays a not-free show at BB King's (7/12).

Saturday (7/9) is also the 4Knots kickoff show at South Street Seaport with Ted Leo and the Pharmacists and Screaming Females. As mentioned, Ted is playing Tyranny of Distance in full at the show.

For something different, Saturday (7/9) also means Pearl and the Beard with Lucius at Moscot and Penguin Prison, Wild Yaks, Janka Nabay, and Monogold at Rockbeach. It's a free show though they are selling $20 bus tickets.. If you miss Monogold at this show, they also play a free show at Pianos in the LES on Tuesday (7/12).

You can also check out the Summer Thunder Series at Union Pool on Saturday (7/9) with Rocksteady Yeti #2 and Prince Rupert's Drops. There will also be free jive energy drinks.

Sunday (7/10) marks the first Beekman Beer Garden 'Beach Party' of the summer with Cheeseburger and Hard Nips at 3 PM. The updated summer lineup is:

Pow Wow! also play as part of Bill Pearis' Sound Bites Series at the Seaport at 3 PM (after a DJ set by Bill that starts at 2).

Head to Insound for a sampler of music related to the RiverRocks, Seaport and Fulton Stall shows.

On Monday (7/11), you can catch Tombs and Primitive Weapons play a free show at Saint Vitus, before Tombs kick off their European tour later this month.

The Stepkids, who are about to release their debut LP on Stones Throw, play a free show supporting Antibalas at Fort Greene Park on Tuesday (7/12). If you prefer your funk with a little more metal in it, you can catch Vernon Reid (of Living Color) play a free show outside City Winery the same evening as part of the Hudson Square Music and Wine Festival.

Wayne's World is screening at McCarren park on Wednesday (7/13).

One of the more exciting free shows of the summer (in our opinion) is the double bill of tUnE-yArDs and Austra. These female fronted art pop titans bring their outlandish shows to Pier 54 on July 14 (Located adjacent to New York City's Meatpacking District (at 14th Street), the Pier 54 gates open at 6 p.m. for all RiverRocks shows, with opening performances scheduled to begin at 7 p.m.).

If you're more in the mood for veteran female rockers, July 14 gives you the choice between Patti Smith's free show at Castle Clinton in Battery Park (where My Brightest Diamond played last night) and Joan Jett's free show in Coney Island (check out the whole summer lineup here).

As if those three shows aren't enough to make July 14 one of the hardest nights to pick a free show to attend, you could also end up at House of Vans for one of their 6 free 'Vans House Parties' and catch Superchunk, Off!, and Lemuria. House of Vans also recently revealed more additions to their summer parties. Check out the lineups which include Fucked Up, Cro-Mags, Man Man, Glass Candy and more.

You can also start your day off on Thursday (7/14) at Metrotech with Swamp Dogg from noon to 2 PM.

The Radio Dept. and Asobi Seksu hold it down at South Street Seaport on Friday (7/15). On Saturday (7/16) it's between Sondre Lerche's free acoustic in-store at Soundfix in Williamsburg and 4Knots Fest at the Seaport with Black Angels, Titus Andronicus, Eleanor Friedberger, and others.

Like the Sunday prior, on July 17 you get the option of the Sound Bites Series at Seaport or the Beekman Beer Garden 'Beach Party.' Hospitality play the Sound Bites Series at the Seaport at 2 PM, and Xray Eyeballs, Frankie Rose & The Outs, and The Babies play a Beekman Beer Garden 'Beach Party' at 3 PM. This Sunday also gives you the option of Pink Martini at Central Park and The Manhattans at Crotona Park in the Bronx with Rhythm Revue.

Read more about this weekends' show in This Week in Indie. Stay tuned for another update like this in a week or two. Some flyers below... 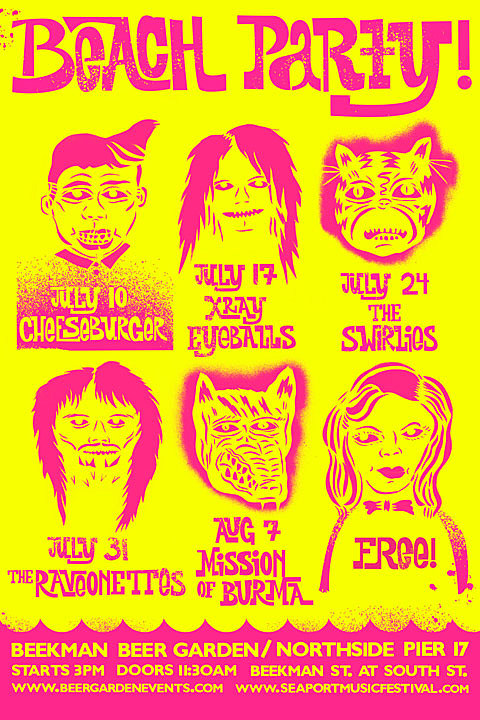 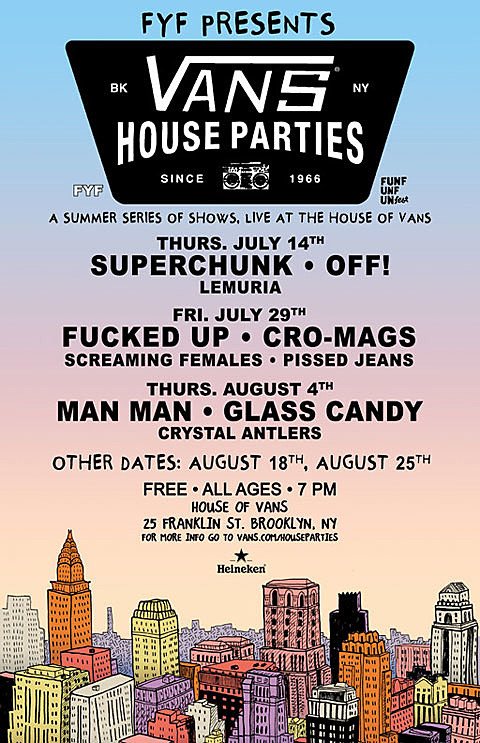