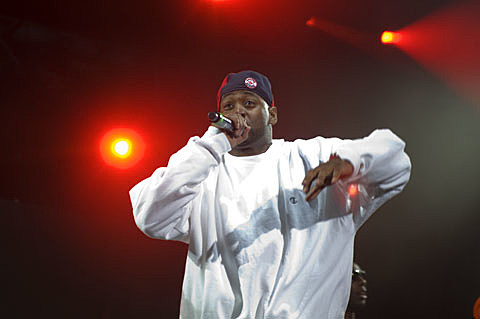 CMJ is almost here, and as usual hip hop is well represented with appearances from the greats as well as those on the upswing. Ghostdini (aka Ghostface Killah) obviously is one of the former, and he'll headline BB Kings on 10/22 with Sheek Louch (of D-Block), and Frank Dukes. Tickets are on sale, or you can get in with your CMJ badge.

Von Pea of Tanya Morgan will play two shows at SOBs in the coming months, with the first happening on 9/29 when he supports Pac Div along with STS and Beyond Belief (tickets). Then less than two weeks later, Von Pea will play the venue again with J-Live in tow to celebrate the release of his new record Pea's Gotta Have It. Tickets are on sale.

And while we're on the subject of former members of Little Brother, Foreign Exchange (aka ex-Little Brother member Phonte and producer Nicolay) will play a CMJ how at BB King's on 10/23 with Darien Brockington, Zo! and a live band in tow. Tickets are on sale. Darien Brockington, who also contributes to Foriegn Exchange, will also be at SOBs in the coming weeks as part of a collaborative show with R&B singer Yahzarah on 10/14. Tickets are on sale.

The Duck Down CMJ show is part of a "15 Year Anniversary" tour for the label. All dates below.

And for those of you planning next week, keep in mind that Talib Kweli will play Brooklyn Bowl on Tuesday (9/28) with Res and K-Salaam. Tickets are on sale.

Eric and Parrish are making more dollars at Knitting Factory on November 19th, as the duo known as EPMD will team up to tear down the joint with D-Money. Tickets are on sale.

Joell Ortiz of recent Slaughterhouse fame will play SOBs on 11/9. Tickets are on sale.

Pittsburgh weed kingpin Wiz Khalifa will play the Best Buy Theater on November 13th as part of a huge US tour dubbed the Waken Baken Tour. Tickets are on sale. All dates below.

Statik Selektah & Termanology's new collaborative LP, 1982, gets an album release party on October 25th at SOBs. Tickets are on sale for the show, which will feature support from REKS & more special guests TBA. Dig on the recent video by 1982 featuring Bun B & Masspike Miles, "You Should Go Home", below.

Some videos and tour dates below...